AT WHAT STAGE IS THE “BILLION TREE” NATIONAL MOVEMENT? 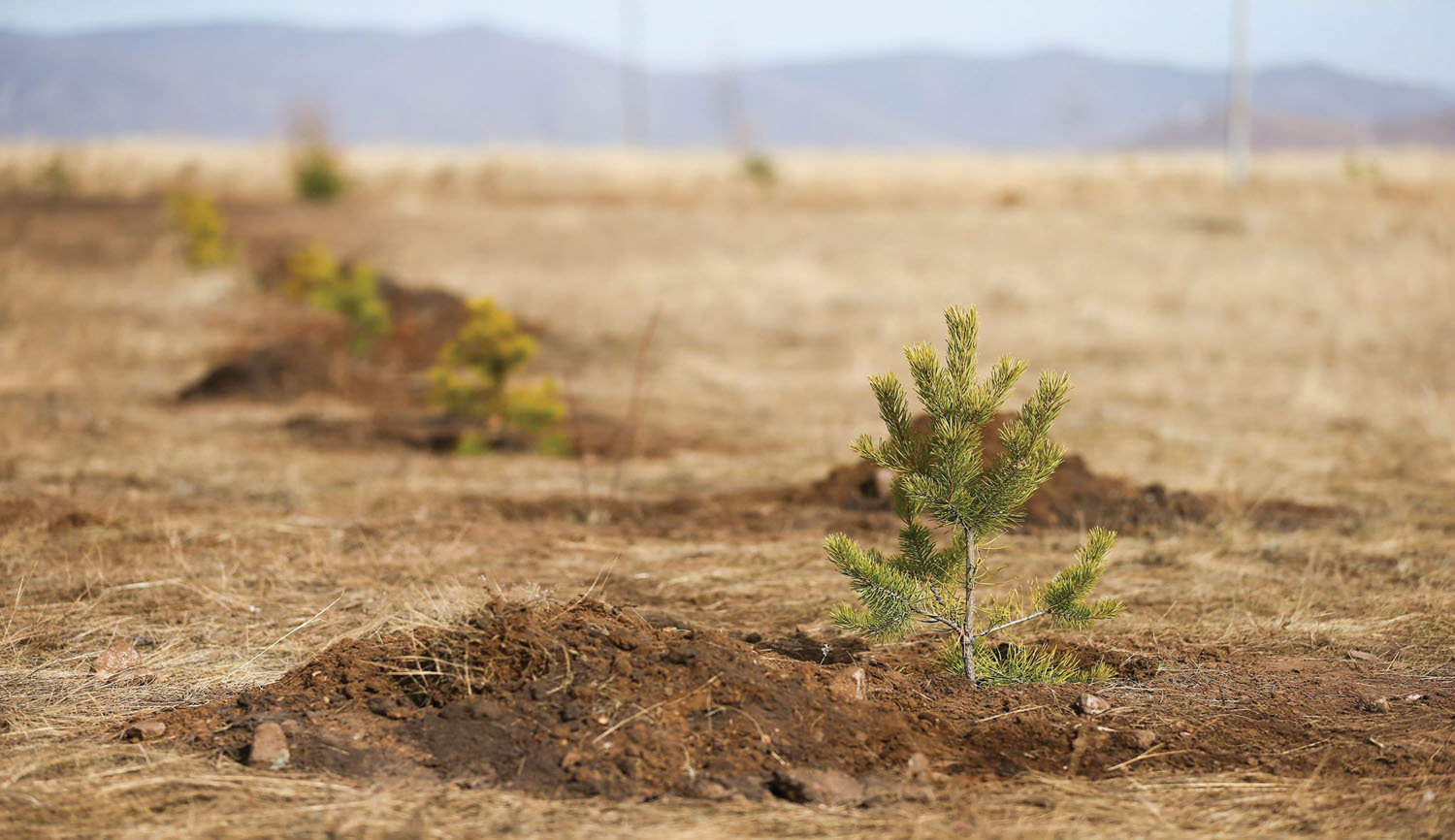 Mongolia started a campaign to plant one billion trees by 2030. Mining companies will play a leading role in achieving this target.

Mongolia has announced a national campaign to plant “Billion Trees” as part of a global green revolution to combat global warming and reduce the impact of climate change. President U.Khurelsukh announced at the 76th session of the UN General Assembly in September last year to the heads of state and government of 83 countries that  “Mongolia launched a movement to plant billion trees by 2030 to address global climate change”. This statement by the President was received by Mongolians in two ways. Some people supported it by saying “It’s a timely decision because about 80% of our land is affected by desertification.” Some criticized: “it’s impossible to achieve it, there is no research, no analysis”.

As soon as President U. Khurelsukh returned from New York, he met with representatives of mining companies and asked them to take an active part in the “Billion Tree” national movement, by planting a certain amount of trees. As a result, 21 mining companies have confirmed that they will plant a total of 608.5 million trees.
These companies include:

Tree planting is not as simple as digging a hole and planting a seedling. Seedlings need constant care until they adapt to the soil and grow. In this sense, this process requires a lot of time, money and labor. Currently, 1,000 trainers have been trained nationwide, and 1% of GDP will be spent on planting trees each year. 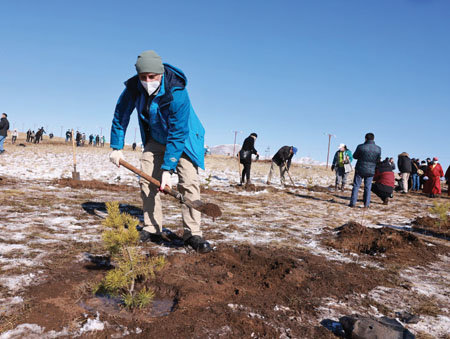 We asked representatives of major mining companies, such as Oyu Tolgoi, MAK, and Erdenet Mining Corporation, whether they had joined the “Billion Tree” national movement and started planting trees, and what challenges they face. The answer was: “ We’re still studying it. The MET will provide support and recommendations to businesses on tree planting methods and techniques. The Ministry will inform us where exactly and how many trees we should plant. We are waiting for guidance from the MET.”

ERDENES TAVAN TOLGOI: ACCORDING TO PRELIMINARY ESTIMATES, WE PLAN TO SPEND ONE TRILLION MNT

- Mining companies are expected to play a key role in the “Billion Tree” national movement. How is this work progressing?
Within the framework of the “Billion Trees” national movement, we are preparing to develop the “Million Tons - Million Trees” program and include it in the company’s A6/20 business plan. Under this plan, 180 million trees will be planted.
We developed the general plan of the “Million Tons-Million Trees” program. This plan identifies the numbers of trees to be planted by program partners, subsidiaries, and contractors. It also identifies target areas and the total budget of the program.
Under the program, “Erdenes Tavan Tolgoi” JSC, the Ministry of Defense, the MULS and the Mongolian Farmers and Flour Producers Association signed a cooperation agreement until the end of 2023.
The development of a detailed feasibility study for the program is being carried out jointly by the MULS and the Mongolian Farmers and Flour Producers Association. The feasibility study is expected to be completed by the end of February 2022.

- Planting trees is one thing. But it is very important to take care of and groom the planted trees. How are you going to do that?
A meeting was held on 23rd December 2021 attended by the representatives of the Ministry of Defense and company subsidiaries and affiliates. The objective was to clarify who would be responsible for growing trees and how this activity would be organized. The Ministry of Defense will participate in the planting and maintenance of trees. The MULS began training soldiers on tree planting techniques.
For example, in the Tarvagatai Nuruu National Park, soldiers will plant trees and take care of them for the first few years. In the future, the Administration of the Special Protected Area plans to continue this work. Once the feasibility study is completed, everything will be clear.

- I understand that exact costs of planting trees are unknown as the feasibility study is not yet complete. However, according to preliminary estimates, how much will your company spend on this work?
According to our estimation, a total of over 1 trillion MNT will be spent. The exact number will be determined by the feasibility study. 13 billion MNT has been budgeted for 2022.

- 180 million is a huge number. What challenges do you face during the planting of trees and participating in the national movement?
First, there is the issue of availability of seedlings. It is estimated that the total number of available seedlings in Mongolia is over 9 million per year. But our company plans to plant seedlings every year, which would be likely create shortages in  the supply of seedlings and increase their price. u
Second, there is the issue of seed resources. It is possible to find seeds of conifers growing in the Khangai region, but there are almost no seeds fortrees growing in the Gobi region. Mongolia doesn’t have a unified state seed fund, and so we try to procure seeds in small quantities from individuals and organizations. However, the lack of laboratory tests on the viability of seeds makes it difficult to purchase.
Third, there is the issue of the Tender Law. Our company is state-owned and all purchases are made in accordance with the laws and regulations on the procurement of goods and services with budgets and local funds. The delay in procurement due to this law might affect the seasonal landscaping work and the chances of losing a whole year are very high.

WE NEED TO PLANT NOT JUST ONE BILLION, BUT MANY BILLIONS OF TREES

Leading researcher of the Botanic Garden and Research Institute of the Mongolian Academy of Sciences, Doctor of Science, Professor and Academician Ch.Dugarjav explained what needs to be taken into account when planting trees

- What should we pay attention to when planting a billion trees?
As an expert, I think it is necessary to focus on the following three things. First, you need to choose the right place to plant and grow trees. Second, the reserves of seeds and seedlings must be sufficient. Third, there is a need to train planting specialists.

Seed stocks are currently in short supply because there were no large-scale tree planting activities in the past. There are seed farms in areas where forestry is developed. As far as I know, there are 6-7 units that produce forest seeds, seedlings and saplings. As an expert, I believe that these units can produce and supply the necessary seeds and seedlings. The Billion Tree National Program will be implemented in 2-3 stages over ten years. I think that this program can be implemented without any problems if we manage to prepare seeds, seedlings and saplings every year. Some trees germinate every year and some every 3-4 years. Since the program will continue for ten years, it is possible to plant more than a billion trees during this time. During the first 1-2 years, we need to train people and produce seeds. From the third year, we can start doing our main job.

- Mongolia has a very low supply of domestic seeds and seedlings and it would take a long time to produce them. If we have to import seeds and seedlings, from which country is it better to buy?
Only from Siberia, Russian Federation.

-Why?
Our forests are a continuation of the southeastern part of the Great Siberian Taiga, so buying and growing seeds and seedlings from there would be most appropriate in terms of species and location. Seeds and seedlings can be obtained from Tuva, Krasnoyarsk, Irkutsk and Ulan-Ude.

- What if we bring seeds and seedlings from China?
The viability of seeds from China is very poor.

Second, trees will be planted to protect farmland, in areas affected by desertification, along roads and railways. If we plant 2-5 rows of trees for over 1000 km along the road, most of the billion trees will be planted. In addition, all aimags, three cities and 330 soums will have parks and gardens. We believe that this way we can plant several billion trees in ten years.