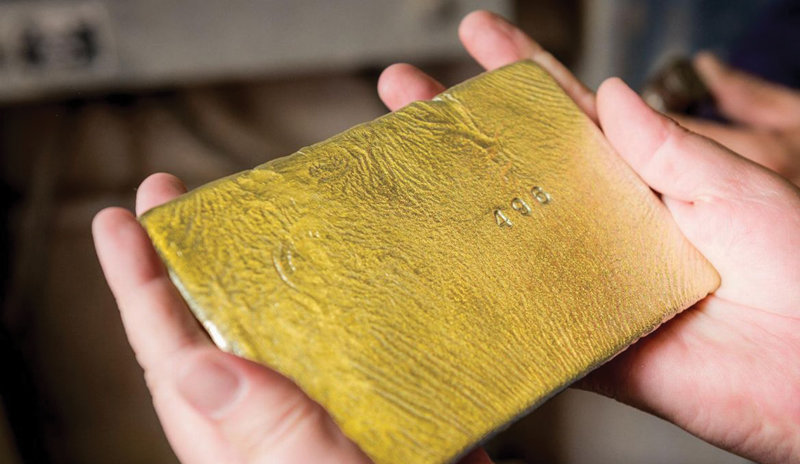 When policy makers said turnover in the gold sector would be between $1 billion and $2 billion, some felt this was being wildly optimistic, but last year’s figures have proved them wrong, with the total value of the gold trade reaching almost $2 billion. The question now is: can this continue? That will depend very much on the success of geological studies in discovering gold deposits and registering fresh resources, as well as on grant of new exploration licences for such discoveries in future.

Informal estimates put our total gold reserves at 2,000 tonnes, of which 1,000 tonnes is mixed with the copper in Oyu Tolgoi. According to information provided by the Ministry of Mining and Heavy Industry (MMHI), about 90 percent of the reserves of 489.5 tonnes outside the Oyu Tolgoi deposit, are in hard rock deposits, with placer gold deposits accounting for the rest. Much of the gold in hard rock deposits is mixed with other minerals such as copper, lead or zinc.

According to the Mineral Resources and Petroleum Authority (MRPA), the number of active mining licences in February was 1,698, of which 91 were for hard rock gold deposits and 442 for placer gold deposits.  Gold mining licences are mainly for deposits in Tuv, Selenge and Govi-Altai aimags.

Placer deposits are very important for the sector and receive financial support in the form of loans under the Gold-2 Programme. However, since they work only seasonally, regular repayment is often a problem. The companies granted loans sold 159 kg of gold in 2017 and 630 kg in 2018. At that time Trade and Development Bank reported that some companies failed to meet their repayment targets as they had stopped operating.

Currently, the work of getting gold from these deposits is a big challenge, as too much stripping has almost exhausted their reserves. That adds urgency to the issue of mining hard rock deposits. The MMHI acknowledges this, and is working on a plan that would mark a new stage in gold mining. The State Policy on the Mineral Sector, as approved in 2014, has to be implemented through sub-programmes until 2025. Gold-2 is the only sub-program to have been so approved. Its first two phases have been completed, Phase-I in 2017-2018 and Phase-II in 2019-2020.   Interestingly, it was initially planned to take up an independent Gold 2025 programme but a later decision turned this into Gold-2, to be implemented in short and separate phases. Two such phases are now over, but neither the MMHI nor the MRPA has so far said anything about a new phase being started. One wonders if, in the absence of the kind of support so far available, the gold sector would achieve a turnover of even $1billion.

One hard rock deposit the government is keen to put into economic circulation is Khoid Burgedei. Its registered reserve is 53.1 tonnes and it is part of the Kharmagtai group of deposits that was discovered 30 years ago. Gatsuurt, with an indicated resource of 70 tonnes, is the readiest hard rock deposit project where to begin operation, but the government is wary of protests by the local community there. Of the projects currently under implementation, the most notable are all foreign- invested. One of them is Erdene Resource Development. It is going start extraction in its Bayan Khundii deposit in Bayankhongor aimag in the first quarter of 2022 and hopes to sell 2 tonnes of gold per year to the Bank of Mongolia. The company works with its focus on the Shinejinst and Bayan-Undur soums of the aimag and has obtained 115 licences there since 2005. Of these, just 5 have led to the discovery of the Bayan Khundii and Altan Nar deposits, and of the Zuun Mod copper-molybdenum and other areas of mineralization. Uudam Khundii, located in the gold district of the Bayankhongor aimag, and Altan Tsagaan Ovoo, in the Dornod aimag, were discovered 18 years ago and are now being implemented by Steppe Gold. Then there is the Tsagaan Tsakhir deposit, discovered following exploration work in Bayankhongor aimag in the 1950s and the 1960s, and where Naran Mandal has now begun production.

That all these deposits mentioned above were discovered at least 20 years ago clearly demonstrates that geological exploration should precede production if resources are to be commercially utlised in a proper way. Oyu Tolgoi and many deposits such as Kharmagtai Bayan Khundii, Altan Nar, Uudam Khundii and Tsagaan Tsakhir belong to the same vein of mineralization, known as a large Central Asian mineralization zone. The western and south western parts of Mongolia where the BUM Gold 2019 Project of geological gold study is being undertaken are also part of this zone. This is the first time Mongolia is conducting thematic baseline studies on gold in these parts of its territory. Part of the work in the eastern part, carried out with funds from the state budget, has been completed and a full report will soon be ready.

A similar report on work in the western part is expected to be ready in July next year.  That would mean that geological gold data, some obtained earlier but now updated, would now be available    in a manner used in developed western countries. Areas that promise to have gold occurrence would be registered in the database of Mongolia’s mineral resources, opening the way for increasing the capacity of the sector. Admittedly these studies are of a limited nature but they show the necessity and importance of granting exploration licences to serious investors if new gold reserves are to be found so that the sector would be a stable source of revenue.