Gold glitters in the economic gloom 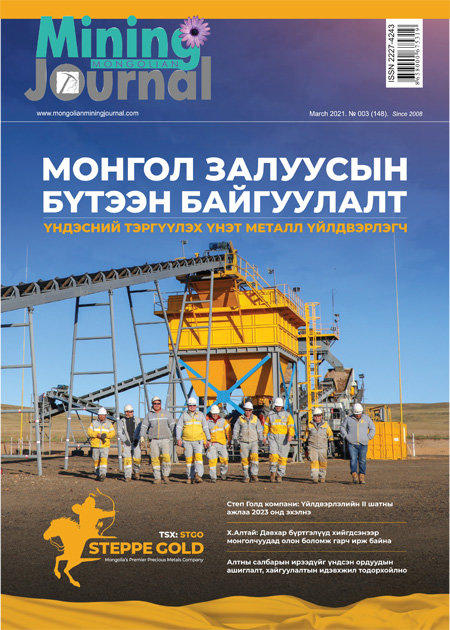 It is heartening to see that the gold sector is being developed in the proper professional way, following strict business principles. Mongolian gold export was the highest ever in 2020, and because prices were high, gold earned almost the same as copper concentrate and coal. In a way gold glittered in the gloom of the pandemic.
Aware of gold’s contribution to the foreign currency reserve and thus helping keep the MNT stable, the government is putting a priority on increasing both extractable gold reserves and production and also building a refinery.

The market has never been better than it was in 2020. In August, the price reached $2067/oz, beating the previous highest recorded in 2011. The year’s average price was $1769.6/oz.  This time our producers were ready to take advantage of the market conditions, unlike in 2011-2012 when they had been caught napping, for various reasons. The last few years have brought discipline and stability to our gold extraction sector, enabling it to make the best of a good market. As gold prices are expected to keep rising, we must not relax our readiness. The producers would earn more and the country’s forex kitty would remain reassuringly full.

At the moment we have over 500 gold extraction licences, most of them held by placer gold miners. However, most of the total reserve is in hard rock deposits. It is no surprise that the latter are the focus of serious investors and operators, mostly foreign. Among them are those executing projects such as Altan Tsagaan Ovoo, Bayan Khundii, and Tsagaan Tsakhir. The government is keen on beginning production at Kharmagtai before long.

No less important is to discover new deposits to replace the present ones when they are exhausted, as they would -- sooner rather than later -- if we extract 30.5 tonnes or more every year, as we did in 2020. To that end, the government has taken up thematic studies of the gold potential in the eastern and western areas of the country. Our colleague E. Odjargal has collected a lot of material related to the prospects in western and southwestern areas.
A major event in the gold sector this year would take place when Toronto-listed Steppe Gold, now the largest gold producer in Mongolia, is also listed on the Mongolian Stock Exchange, making it only the second such instance of dual listing. Our present issue covers all aspects of this important development.

Before last year, Mongolia recorded its best gold export figures in 2005 when 23.8 tonnes were exported for $331.4 million. The precious metal made up 31 percent of total export. In comparison, 30.5 tonnes were exported in 2020, earning $1.79 billion and claiming 23.6 percent share of total export. It is interesting that last year’s volume of gold export was 28 percent more than in 2005, but the corresponding increase in revenue was 439 percent. That shows how important it is to grab market opportunities.
Many of the achievements of the gold sector can be attributed to the help it received from the Gold-1 and Gold-2 programmes of the government. G. Iderkhangai has written on this example of successful cooperation.

While the private sector provides the real force in driving the gold sector forward, state owned projects would also have to do their bit. How and just when they would do it is still unclear. Erdenes Mongol was given six gold deposits last year, one of them being the Kharmagtai hard rock mine. Developing them to the stage of production is only one part of what the government is expected to do. Another is building a refinery which must meet the rigorous standards of international acceptance.
All seems set to take the gold sector to new heights, but there is no room for complacency. All stakeholders must join hands to make the most of high prices and ensure they do not stumble on the way.