Arguably the most important feature of the draft budget for 2021, awaiting approval by Parliament at the time of writing this, is its commitment to observing fiscal discipline, something that was made impossible this year by the pandemic. The budget deficit this year is expected to be 12.5 percent of GDP, much higher than allowed by law, but the 2021 draft puts it at 5.1 percent, which is under the permissible limit. In absolute terms, the deficit in 2021 would be MNT2.6 trillion less than this year’s. This has been achieved mainly by reducing expenditure by 4.3 percent from the 2020 level and by raising revenue, both in accordance with the Fiscal Framework Statement 2021, passed on 28 August, 2020. 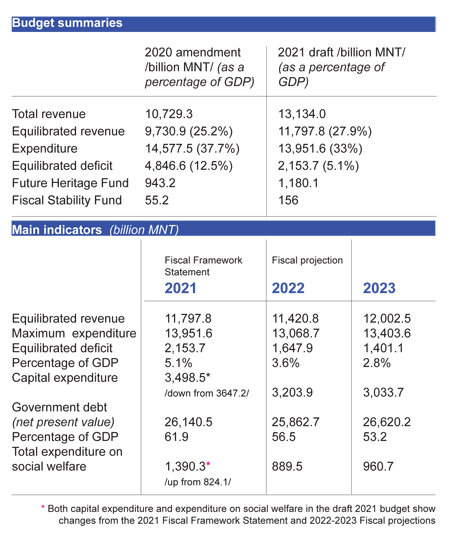 If the deficit actually comes down to the level estimated would depend on how much revenue is finally collected. The Mongolian National Audit Office (MNAO) has warned that if external factors turn negative, the equilibrated revenue – projected at MNT892.3 billion higher than in the 2019 budget and at MNT2.1 trillion higher than in the 2020 budget – could be less. This is something that we can only wait and see, more so as the times are so uncertain.

There are imponderables galore but the hope at present is that next year would be one of post-pandemic recovery. The Finance Ministry expects that domestic mines would be back operating at their normal level.
As against that hope is the actual good news that on 23 October Mongolia was taken out of FATF’s ‘grey list’. This came after the EU had, on 6 October, released Mongolia from its list of non-cooperative jurisdictions for tax purposes.
The government expects the economy to grow by 7.2 percent in 2021 and the GDP to reach MNT42.2 trillion.

The government’s success in raising revenue is crucial to its final ability to reduce the budget deficit. To that end, it plans to mop up MNT2,166 billion through domestic bonds and receive MNT1.56 trillion from foreign grants and loans. The Fiscal Stability Fund will release MNT156 billion and other savings will contribute MNT150.9 billion. These add up to MNT4,034 billion, of which MNT2,153.7 billion would go to covering the budget deficit and the remaining MNT1,880.3 billion would be spent on paying dues from foreign loans and domestic bonds.
At the end of September, the Finance Ministry announced that $600 million had been raised from the sale of what is being called Nomad bonds, which mature in 5.5 years with a 5.125% coupon.  The money was used for the premature redemption of much of Mazaalai bonds and some Chinggis bonds. This eases to some extent next year’s debt repayment pressure on the government but borrowing-to-repay is usually not good economics, though in this case the government is happy that the Nomad bonds carry lower interest than those that are being redeemed.
Next year the government would require MNT3,017.8 billion for debt servicing, which is equal to 23 percent of the consolidated budget revenue and 89 percent of the revenue coming to the budget from the mining sector.

Government debt is expected to reach MNT28.7 trillion this year and MNT31.1 trillion next year. These are face values, and the MNAO has warned that with 87.5 percent of this total to be repaid in foreign currency, the repayable amount could end up being more depending on the exchange rate at the time. The MNAO has advised the government to work on this issue in compliance with the Strategic Document on Governmental Debt Management 2019-2022. 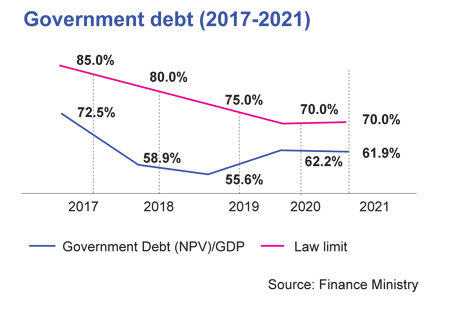 The mining sector is projected to contribute MNT3.4 trillion to the state budget next year, or 26 percent of the total revenue, the highest ever in terms of value. The central bank would purchase 20 tonnes of gold, MNT1.34 trillion would come from export of 42 million tonnes of coal and another MNT1.5 trillion from that of 1.4 million tonnes of copper concentrate.

Income from copper concentrate export by Oyu Tolgoi would rise largely because the gold content in the concentrate would be considerably higher, but it is doubtful if coal export would reach the projected 42 million tonnes. The Finance Ministry thinks the Chinese economic and industrial recovery would make this possible, with help from the ‘Green Gateway’ arrangements and customs reforms, but this very ambitious goal has been set and missed twice before. However, Finance Minister Ch. Khurelbaatar may very well be third time lucky. In the view of the MNAO,  the target, 14.4 percent higher than what was exported in 2019, is not easy and would require better and more coordination among several organizations and also some new measures.
The average copper price has been set at $6500/tonne, 19 percent higher than the equilibrated price of $5465.1/tonne, and the equilibrated price of coal at $76.3/tonne. That means the Fiscal Stability Fund will gather MNT100.8 billion from copper and MNT55.2 billion from coal.
Of the MNT1.2 trillion estimated to go into the Future Heritage Fund, MNT990.1 billion will come from mineral royalties, MNT155 billion from state-owned companies’ profits and MNT35 billion from interest on revenue. 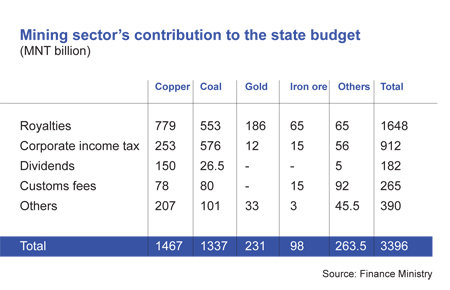 The budget will receive MNT183.2 billion from an estimated 5.8 million barrels of oil exported at $47.9/barrel.
The fees and other payments from the 2,751 mineral licences nationwide -- 1,676 for extraction and 1,075 for exploration -- covering 6.6 million hectares will put MNT31.2 billion into the budget.

The 2021 budget aims at keeping a balance between the needs to help citizens and to have fiscal stability. The present system to give every child MNT100,000 per month will be continued until 30 June next year. The government wishes to spend more to stimulate the economy when it is struggling and so the capital expenditure in next year’s budget will be relatively big, MNT3.49 trillion.

Things are not so bad if we forget the here and now, and look ahead. Commodity prices are good, coal export is picking up, the oil refinery is under construction, development of the OT underground continues, Ulaanbaatar will get a water treatment facility before long, railway projects are on steam, power plants would be coming up, and paved roads built. The Finance Ministry sees economic growth of 6 percent on an average in the next three years. It is right to dream that we shall end up doing even better .