The Oyu Tolgoi Technical Report 2020, uploaded on the company’s website on 28 August, sees extraction at the open pit mine – Oyut -- and at the underground mine -- Hugo North Lift 1 – ending in 2051, six years earlier than what was indicated in the 2016 report, bringing expected gross revenue from sale of concentrate down to $69.4 billion from $82.8 billion. The extraction schedule in the new report incorporates the effects of the change in the underground mine design but does not take into account the impact of the pandemic on production.

Work on developing the underground mine has not stopped despite the pandemic, though it goes on at a slower pace, especially in Shaft 3 and 4 construction. In the meantime, Turquoise Hill published a revised OT feasibility study in July and followed this up with the updated Technical Report. 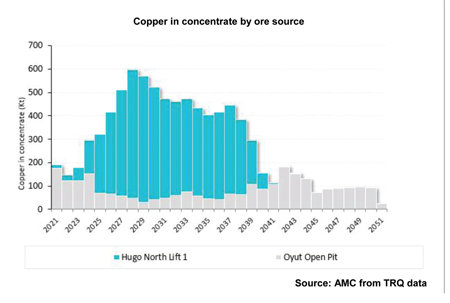 OT currently uses 187MW of power, but this would go up to 230MW during the ‘super cycle’. As for water, the mine is entitled to use water from the Gunii Hooloi aquifer at level of 918 l/sec, but an updated study says the aquifer can allow up to 1415 l/sec. 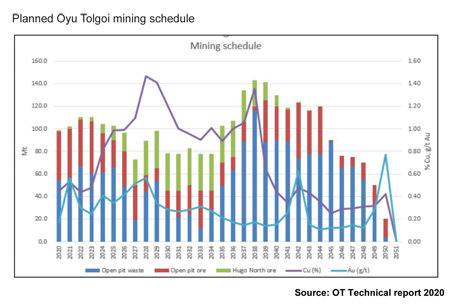 The report mentions that sales could be affected if the concentrate fails to meet Chinese import standards. As of now, the arsenic level is within acceptable limits but those of lead, cadmium, and mercury are being reviewed. The total dependence on Chinese buyers is another risk, and the company says it hopes to be able to reach third markets through Chinese and Russian ports.

OT has earmarked $1.3 billion as mine closure costs, to be spent over a period of 15 years.
The loss to Mongolia from the shorter life of the mine could be offset if the company opts to develop other sections of the mine. This, however, is a big decision that can be taken only after an evaluation of both political and commercial factors, both of which are unpredictable now.