COVID-19 and mining  outside Mongolia

One after another, mining companies around the world -- big or small – have been announcing since mid-March temporary suspension of their operations or, in some cases, reduction of production. The decisions were taken as governments worldwide imposed total or partial lockdown of their national economy in an attempt to contain the spread of COVID-19. Almost everywhere all non-essential activities were suspended. Mining provides many essential items of daily use, but it was defined as non-essential in countries such as Mexico and Peru, though Australia, Argentina, Brazil and Chile were among those which did not follow suit. Jurisdictions like Quebec shut down mining as a non-essential activity but made a volte face only weeks later.

Mexico is one of the largest producers of silver and the government there allowed mining and exploration activities to resume on May 18 in areas with few or no known COVID-19 cases or transmission but decided to continue with quarantine and other restrictive measures until at least the end of May. According to GlobalData, over 1,600 mines across 32 countries temporarily suspended work as of April 3. The number went down to 729 by the end of April but few with a full workforce or to full capacity.

Naturally, all this affected global production. GlobalData reported that as much as 65.8 percent of global silver production was on hold as of April 27. The closure of mining activities in Peru, the world’s biggest producer of zinc concentrate, from March 15 to May 10 was a major reason why, as estimated by Goldman Sachs, global zinc supply has been 25 percent less than normal. The lockdowns in Peru have also resulted in the country’s copper production falling by 12 percent year-on-year in the first quarter of 2020. On the other hand, Chile had imposed less stringent restrictions and, BMO Capital Markets reports, saw its copper concentrate production increase 4.8 percent year-on-year in the same period. Progress has also been stagnant in mines under construction, including in one of the world’s biggest copper mines -- Anglo American’s $5.3-billion Quellaveco project in Peru. BHP has announced that its Spence copper mine expansion in Chile would be delayed until early 2021. 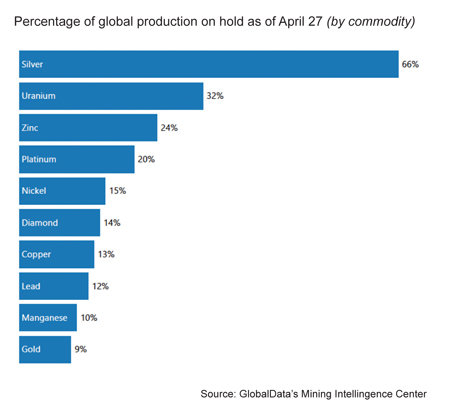 Almost 32% of global uranium production, 24% of zinc, 20% of platinum, 15% of nickel, 14% of diamond and 13% of copper production were on hold as of April 27, GlobalData reports. The halt in production increases fear over supply shortage of critical metals. Although prices of most commodities have declined since the beginning of 2020, uranium and gold prices rose since end-March. Gold profited from its safe haven status during the pandemic. Spot gold touched its highest since November 2012 at $1,751.25 an ounce on May 15. Uranium prices increased by 34 percent since the beginning of 2020 responding to this pandemic-driven supply shock. Operations at Cameco’s Cigar Lake mine, the world’s leading uranium producer in Canada, was temporarily suspended on March 23 for an indefinite period.

Prices for industrial metals have fallen from 2 to 18 percent since the beginning of the year. The price of silver is now improving week after week after a sharp drop in mid-March to $11.94, its lowest point in over 10 years. Other mineral prices are also edging higher since the decline in end-March, yet prices are still low compared to the start of 2020, except for gold and uranium.

Faced with strict health protocols and travel restrictions, besides weak commodity prices, mining companies are trying to effectively manage all capital spending and operating costs, while maintaining a high level of safety and productivity. The constraints put on their financial, commercial and business activities are way beyond what can be called normal risks.

The most immediate impact is to be seen on production levels and unit costs in the first and second quarters of 2020, particularly for companies with mines either shut down or operating on a much reduced scale. Teck Resources and New Gold are among many other mining companies to withdraw their previously issued 2020 guidance due to “the rapidly changing and unpredictable environment” caused by the spread of COVID-19.

The impact on operating costs of companies will grow as operations currently placed in care and maintenance remain in that state for an extended period. Companies have to ensure the mine, mill, and associated infrastructure under care and maintenance are safe and secure, and positioned to restart efficiently when conditions allow. The operation suspension costs vary because of different labour contracts and other variable and fixed costs. Trevali estimates its one-time care and maintenance costs over April and May to be $5 million, while First Quantum Minerals estimates its temporary costs between $4million and $6 million per week.

As the situation continues to evolve in different geographical regions, there is no clarity on the duration and extent of disruption to sales and supply chains. Mines that remained operating saw another challenge related to disposal of their products. First Quantum Minerals had to seek fresh routes to export their copper due to border closures in South Africa and Zimbabwe. International and local travel restrictions related to COVID-19 have also affected the company’s exploration programs. 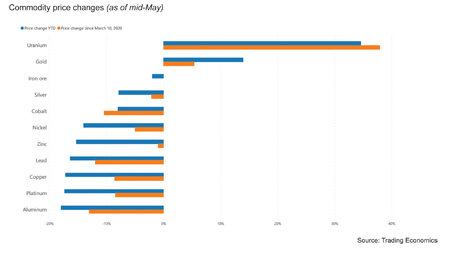 As governments begin loosening restrictions, mining activities start to gradually ramp up and plan for restart of operations that could take from weeks to months. However, the return to normal operations may be very different due to productivity impacts and new protocols in place at mine sites. Most companies took extensive measures to ensure the safety and well-being of its employees. Some common measures and precautionary steps taken by mining companies to manage and support the containment of the virus include:

•    28-days on and 28-days off schedule for FIFO workers
•    Increased frequency of sanitized cleaning at site and equipment
•    Enhanced employee hygiene practices
•    Physical distancing on site
•    Quarantine plans in place
•    A mobile COVID-19 test lab at site
•    Temporary closure of corporate and regional offices
•    Enhanced screening protocols, including pre-screening before arrival at site, temperature checks and completion of personal health questionnaires
•    Suspended or postponed non-essential travel (domestic and international), events and projects
•    Installation of thermal cameras at the entrance to facilities to detect high body temperature
•    Web resource with details on protocols
•    Closure of all bars, gyms and pools at mining camp sites to limit social interaction
•    Work from home protocols where possible
•    Higher-risk employees (over 60, pregnant, chronic health conditions) sent home
•    Support systems for physical and mental health support to employees at each site and office
•    Training in updated protocols for personnel during ramp  up
•    Liaising with governments, regulators and other external
stakeholders to closely monitor developments

Several companies such as Hudbay and Trevali introduced their crisis management plan, including establishment of committees, such as Pandemic Response and Business Plan Committee by New Gold, working closely with local governments and communities. On the other side, the city of Brumandinho in Brazil saw its mayor suspending Vale’s operating licences in mid-May because the company’s onsite activities had “not respected the rules of social isolation”.

While the precise impact continues to evolve, the broader impact on the industry could be significant, including higher production costs and consequently increased cost of sales. As mine development projects are being delayed around the world, more 2020 capital expenditures are expected to be deferred into future years. And the scale and impact of the pandemic is still unknown.

As mining companies look into the future, returning to normal operations and recovering from the pandemic shock are going to be the absolute priority. However, the pandemic has also shone a light on the existing crisis management plans or the absence of these within a company, providing an opportunity for the whole industry to re-think how to position themselves in the long-run against similar disruptions. Autonomous technology was gaining weight across the industry even before COVID-19, and its use would now be accelerated.
“Resilience” and “co-existing with COVID-19” are to be the common expressions as the situation evolves rapidly on a daily basis and as businesses around the world continue to adapt to the “new normal”.