Coal export limping back, but “normal” is far off

Note: All figures in this report are from data released by the National Statistics Office and cover the period 1 January to 15 April.
Mongolia’s total foreign trade turnover reached $2.54 billion, a drop of 30.9% YoY.  Exports accounted for $1.18 billion of this and imports for $1.36 billion, down 43.7% and 13.7% respectively. The foreign trade deficit of $175.9 million was mainly because of the dramatic decline in mineral exports.

The last days of the period under review showed some improvement in coal and oil exports, but this is only when they are seen against the situation in most of March, when exports were almost stopped. Any return to the pre-pandemic levels is still a long way off.
Mongolia exported 3.52 million tonnes of coal, which is 62.4% or 5.85 million tonnes less YoY. Coal exports, which had been suspended since February 10 to prevent the spread of the coronavirus, resumed gradually or step by step in March. Export through the Zamyn-Uud port started on March 5, through Gashuunsukhait on March 23, and through Shiveekhuren port on March 30. In March, only 341,000 tonnes were exported while the first 15 days of April saw 400,000 tonnes of coal cross the border. It is unlikely that exports would be even close to the previous two years’ high figures, and that means much revenue would be lost. Export earnings from coal so far have reached $284 million, some $500 million less than expected.

The corresponding loss from copper concentrate export has been $184 million. Here also, the export volume has decreased but even then copper is now the leading mineral export product in terms of value. Export of copper concentrate reached 359,400 tonnes and earned about $410 million. That’s a 15% drop in volume and 31% drop in revenue. The significant decline in gold content in Oyu Tolgoi’s concentrate this year and the slowdown of transportation have caused the decrease. Prices have fallen by about 20 percent since the beginning of the year. Refined copper exports rose 18.4% YoY in volume to reach 3,600 tonnes, but revenue increased by only 7.3%.
Iron ore exports have been going up and reached 2.4 million tonnes, earning $164.5 million -- a 3% drop YoY in volume and 23% increase in revenue. Exports of zinc ore and concentrate and molybdenum concentrate all declined. Exports of fluorspar ore and concentrate increased in volume, but both earned less.

Crude oil exports rebounded from 34,600 barrels in March to 37,600 barrels in the first 15 days of April but income was down 82% or by $84 million YoY.
The central bank’s gold purchase has increased significantly, but there has been no export since 1.6 tonnes in February. 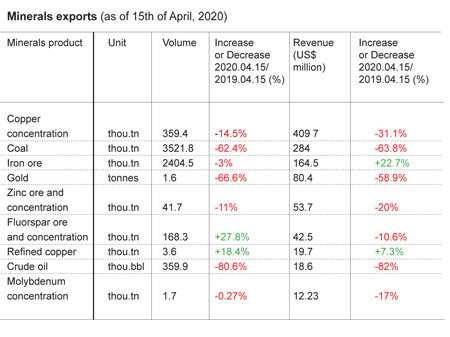