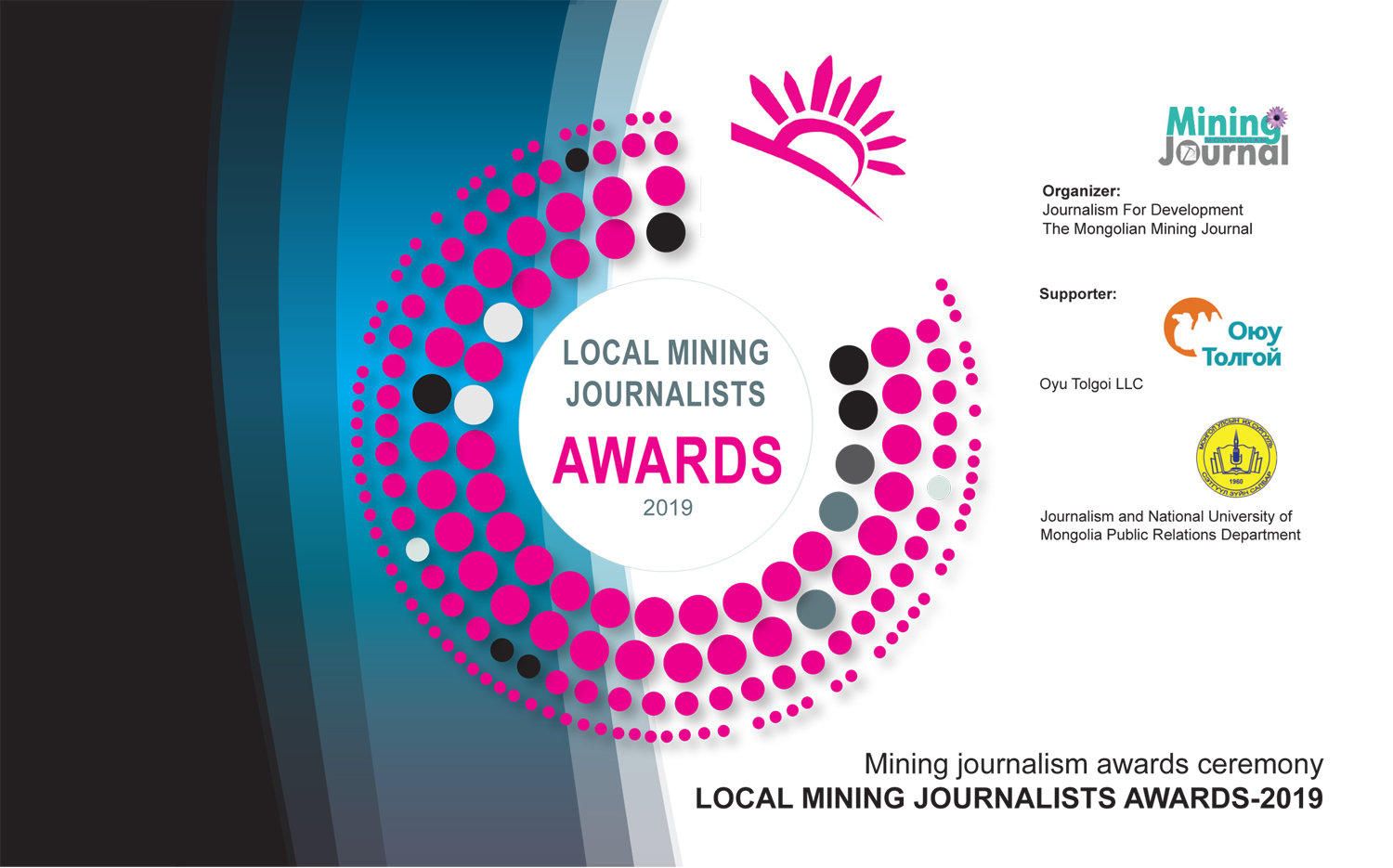 Over the last few years, The Mongolian Mining Journal and its affiliate Journalism for Development NGO have been working to enhance the capacity of journalists working in the provinces. On 2 November, a milestone was placed on that road to better journalism when the first “Local Mining Journalists Awards” were given away at a ceremony in Ulaanbaatar.

The happy occasion, culmination of months of hard work by both trainers and trainees, was inaugurated by Mongolia’s first President, P.Ochirbat, who is also a celebrated name in the country’s mining sector. In his brief but impassioned address (published elsewhere in this issue), he said human society would not have developed to its present stage, and would not develop further, without mining.  “Even with rapid digitalization, technology will always need minerals. Therefore, there would be mining for as long as we have human beings.” Describing mining as “an eternal theme for mankind,” Ochirbat called upon journalists to give miners the praise due to them. Mongolia in particular owed them a lot for helping hold up the national economy.

MMJ set up Journalism for Development NGO to assist fellow journalists who work away from Ulaanbaatar and thus miss the many facilities and opportunities available only in the capital city in understanding specifics of mining and the economy. They are where the mines are and where the action is, so it is essential that they acquire the skills to be able to write accurately on a wide range of mining subjects, and to prepare informative television programmes. Our goal was to help them become specialized journalists, and our strategy was to learn and develop together by sharing our experience.

This was done at workshops, where central journalists would transfer their professional skills to their local counterparts, so that the latter would be more proficient in gathering relevant information and then reporting them accurately and in an unbiased way. The subject could be anything from actual operational decisions to cash flow to the economic and environmental impact of mining in any area.

The first of these capacity building workshops for local journalists was on “Methodology to report mining information” and was organized nine years ago from today in Umnugovi province Today the Local Journalists Network includes 35 local journalists from 21 provinces. Some participants from the first course have continued to be members of the network and their and others’ reports from provinces and soums across the wide territory of Mongolia can be found at www.mongolianminingjournal.com.

This year, the Local Journalists Network project took up two themes: The Economic Impact of Mining, and Locals and Mining. It is worth noting that the Department of Journalism and Public Relations at the National University of Mongolia, The University of British Columbia’s Graduate School of Journalism, and Global Reporting Centre, which conducts an independent study on global journalism, have assisted in disseminating the journalism methodology. Their involvement means that, apart from learning about complex mining and economic issues, network members are taught journalism skills and ethics by experienced teachers.
The awards were instituted to get an idea of how helpful the workshops have been. Everything that every participant produced on any aspect of the two themes was considered for the awards. 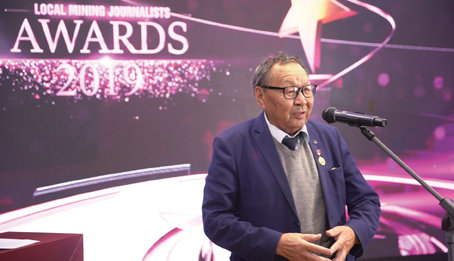 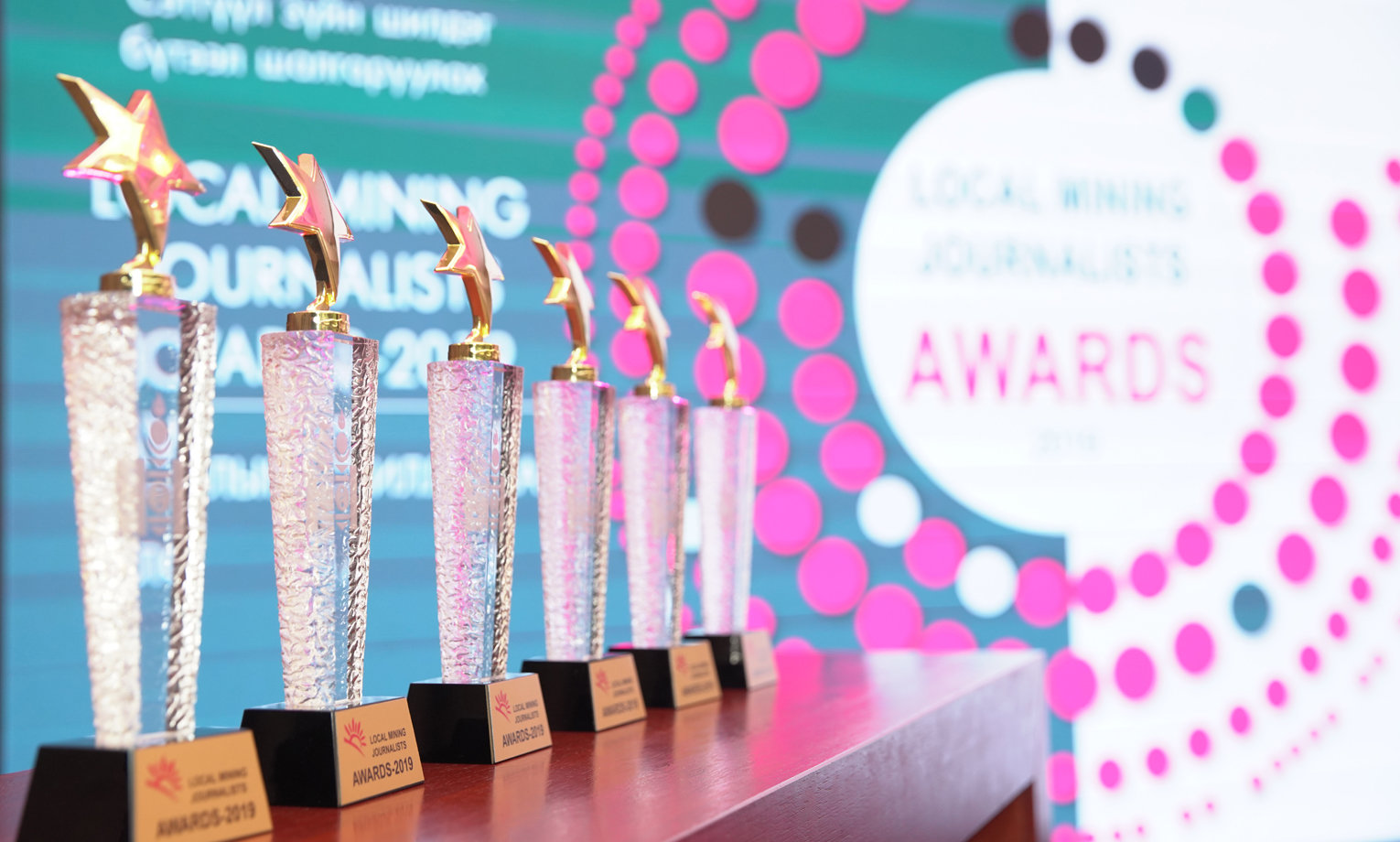 The workshops on this theme provided some theoretical knowledge and also covered the various ways of reporting from the ground about mining activities in provinces and soums based on information gathered from multiple sources and then sifted for accuracy. Selected MMJ journalists acted as mentors to 35 journalists from 21 provinces, communicating via the internet. The output over seven months was over 80 articles and TV programmes, and all of them were posted at www.mongolianminingjournal.com.

The awards were instituted in five categories and there was to be a separate Grand Prix. This was won by D.Ulaankhuuhen, Editor of Sukhbaatariin Ungu, for the general quality and range of his work, and particularly for the two articles, “Sukhbaatar province will support responsible mining” and “A resource fund should be established using mining revenue”.

Below is the list of winners in the other categories.
The best in print: P.Sanaadagva, Editor of Unuugiin Bayankhongor, for his articles “Responsible mining starts from being professional” and “Mining needs transparency as much as water and air”.

The best newspaper journalist: Kh. Tsevegmid, of the newspaper Arkhangai Toli for his “Will Nuclear Energy Mongolia resume its uranium exploration activities?” and “Government sends proposals for exploration, but we do not accept them”.

The best on the web: P.Nyamtsetseg, of the newspaper Unuugiin Dundgovi of “D” Media Group for her “Lessons of the ‘drained water’ that cannot be drained” and “The concentration of arsenic in the fluorite processing plant of Eco Khelkhee exceeded the acceptable level”.

The best TV journalist: B.Gantuya, of ETV HD TV of Erdenet city of Orkhon aimag for her  “A sub-programme to reduce white dust and its negative impact” and “Erdenet Mining Corporation’s water loss issues were discussed”. 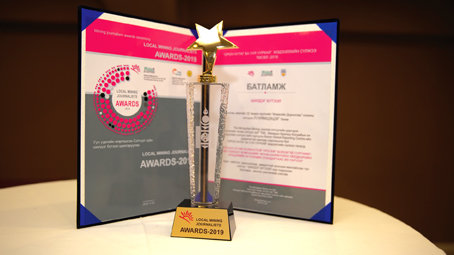 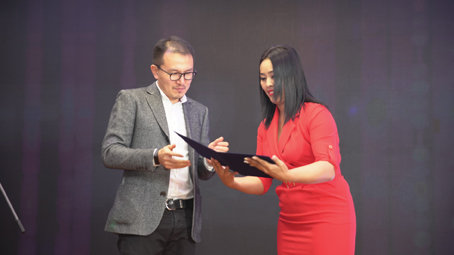 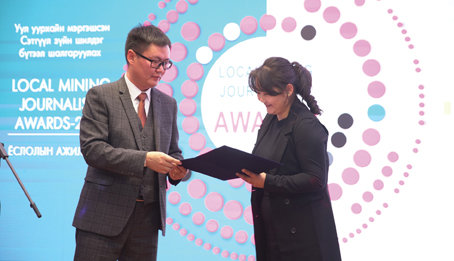 This part of the Local Journalists Network 2019 project was implemented in cooperation with Oyu Tolgoi LLC. The articles and programmes prepared under the project were evaluated and rated by a panel of jurors. The mining industry representative on the panel was Dr. D.Galsandorj, Professor of International Economic Studies and Consultant Engineer, and Dr. B.Naranbaatar, Dean of Journalism at NUM, represented the journalism side. The other members of the jury were from the media team of Oyu Tolgoi, and the MMJ. A total of 32 entries were submitted by 20 journalists.

The Grand Prix went to S.Sumiya, Chief Editor of the www.melmii.mn video website of Umnugovi province for the programme “The State policy in mining for local development”.
The other winners are listed below.

First prize: E.Otgontuya, of The Agar in Dornod province, for her article “While waiting for the law to be enforced”.

Second prize:  L.Otgonbaatar, of Darkhan TV, for the programme “We need micro-mining”.

Third prize: J.Saruul, Editor of the www.khovdtimes.mn website of Khovd province, for his article “About the open and hidden issues of the Khushuut mine”.

We feel gratified that even with their uneven quality, all the work done by the trainees reflected a desire to place issues against the national background, and not to see them as matters for only one province. There were frequent references to the corresponding situation in other provinces. It was clear that the series of workshops had helped the local journalists absorb new ideas and develop a new outlook, often breaking out of a conventional mould. To borrow the title of one of the prizewinning efforts, responsible journalism begins with being professional.

S.Purevsuren, from Dundgovi and a member of the Local Journalists Network, says,  “Young people are coming into Mongolian journalism, and those among them who work locally are not less talented or less capable than others. This often forgotten fact was highlighted at this ceremony. The new generation of local journalists is not just bringing a new voice on the Mongolian media stage, it is also distinguished by its talent, its independence and commitment to fair journalism. We are dedicated to our chosen profession and will not be sold or succumb to any pressure.”
Our special thanks are due to O.Batbold who, as Deputy Director of the Integrated Mineral Resources Initiative (IMRI) programme of GIZ,  supported the project all through and offered invaluable help in taking it to 21 provinces. He is currently working as a Senior Consultant to GIZ in Cambodia and sent his best wishes for the success of the ceremony. In his message, he reminisced, “Five years ago, MMJ’s Editor-in-Chief, L.Bolormaa, came with her colleagues to us at IMRI to introduce their project. Their wish was to fill a space left empty in Mongolian journalism, to re-train local journalists, and to provide them professional assistance. These aspirations have marked every aspect and every stage of this project and have been the cementing factor behind our co-operation… The IMRI of GIZ is very happy that it supported and funded part of the project in the past four years. May the number of brave and skilled local journalists increase, and may there be many more of them ready to innovate and leave a unique mark on the media.” 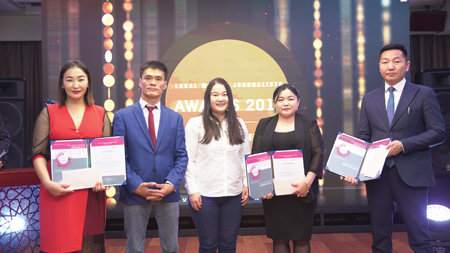 With his sympathetic mind, O.Batbold understood what L.Bolormaa wanted. She is no more with us but some words in her report on the first local journalists’ workshop still resonate. She wrote, “May a new and fresh wave in Mongolian journalism mark this interesting period of the country’s development. May this wave be ruled by professionalism and wash away the current dead wood of our journalism which makes money by flattery and backbiting. Our news offices will follow only professional methodologies and local news will be brought closer to the centre. The Mongolian Mining Journal has undertaken the responsibility to widely disseminate information on mining in the provinces, bringing to the fore issues of wider concern, and to understand and explain the multiple positions of local communities and the administration.”
Her vision helps us think and plan big. The local news network will bring local news to the world media platform, publish local journalists’ articles in English and inform international readers about the great developments happening in local areas in Mongolia. We are pleased to reveal that a modest start is being made: the award winning articles will be published in the global news section of the Global Reporting Centre.