“Arkhangai will survive and prosper without mining”

Arkhangai wants to be an aimag without any fresh mining. Kh. Tsevegmid, a reporter with The Arkhangai Mirror, asks its Governor, Ts. Monkhnasan, about the decision and how it is being implemented, and about the present mining situation, especially as relates to reclamation, there. 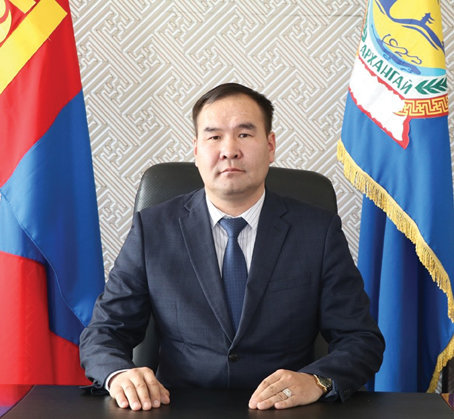 What is the policy of the aimag on mining?
Both the local parliament and I myself have taken the policy that Arkhangai must develop without any fresh mining. The initial impetus came in 2015 with the amendment to the long-named law, and we intend to keep more mining out as we try our best to quickly make use of the other opportunities for our aimag to develop, such as by promoting tourism, animal husbandry and industry. The government wants to encourage new exploration and offers licences but we refuse to approve the proposals. We are doing a lot to make a success of the Each Household is a Producer program which would provide citizens with jobs and income. We are confident that our aimag will survive and prosper without mining.

But you do have mining. How many active exploration and extraction licences are there in the aimag now, and where do they operate?
Soum-wise, there are 12 extraction licences in Tsenkher, four in Tovshruulekh, two in Ikhtamir, and one each in Olziit, Battsengel and Tariat. Work has already started under nine of these in the territory of Orkhon bag. There are 11 exploration licences: three in Tovshruulekh soum, two in Jargalant soum and one each in Chuluut, Khotont, Tsenkher, Khangai, Ikhtamir and Erdenemandal soums. However, no exploration activity is going on at the moment.

The companies operating in Orkhon bag are all gold miners, no? Who are they?
Altaigold, Golden Hummer, and BMKhS. Their mine plans have been approved by the Minerals and Petroleum Authority and their environment protection management plans by the Ministry of Environment and Tourism. A working group set up under my orders as the aimag governor monitors the work of these companies. It did not allow three licence holders -- Mongol Gazar, MGH, and Senshivei Mongol -- to start working as they did not have some of the required documents. Some companies made agreements with Mongol Gazar and MGH to do extraction in areas covered by their licences, but we asked them to leave before they could start their what would have been totally illegal operations. Mongol Gazar and MGH have been causing problems for the last several years and in recent times, one major concern for us has been situations where people work under the so-called triple contract in areas for which no licence has been issued.

How do you solve these problems?
The licences of Mongol Gazar and MGH have been transferred to Altai Gold and Bat Dolgoon Moron. We have been assured that these two companies which now hold the licences will be directly doing extraction, and not let small companies into the area, and that they would also do post-mining reclamation. Our main interest was to get rid of Mongol Gazar and MGH for their many illegal acts and to make sure that proper reclamation work is taken up at the right time.

Another cause for relief has been that the Orkhon river water is good again. It had turned yellow in 2016, and we asked the government for help.  D. Oyunkhorol, then Minister of Environment and Tourism, himself led a team here to study the problem firsthand, and now things have improved.
In May, a working group comprising representatives of relevant legislative institutions of the aimag set up a watching post in Orkhon bag, manned by officials from Police, Professional Inspection, Environment and Tourism, and Emergency departments. Their task is to stop mining operations that are illegal because of lack of proper documents, to ensure that there is no breach of the social order and that there is no environmental pollution, and to prevent unauthorised companies and individuals from bringing heavy duty equipment into mining areas. The group also submits recommendations on how to prevent rivers from being polluted by improper activities in the tailings ponds and to ensure that there is no other infringement of approved working procedures.

Approximately how much land has been degraded by mining and how much of it has been reclaimed after completion of mining?
It was in 1999 that gold mining started in Orkhon bag of Tsenkher soum. Following passage in 2009 of the Law on Prohibition of Mineral Exploration and Mining Operations at River Headwaters, Protected Zones of Water Reservoirs and Forested Areas, gold miners had to stop further extraction and reclamation work was taken up at more than 50 percent of the total area degraded by mining. Later the government decided to release for mining certain areas covered by the law and mining could resume in 2015. As of today, more than 1000 hectares stand degraded and only 20 percent of them has been reclaimed.

We are working with professional organizations to estimate the damage caused by Mongol Gazar and MGH, both of which failed to do any reclamation work on the 420 hectares degraded by their extractive operations in five licensed areas. We would also make an estimate of the money that would be required for the reclamation and apply to a court of law to ask the two companies to pay the money. Mining operations are still on, so it is impossible to work on reclamation in the total area.

Almost 90 percent of those working in mining in Orkhon bag used to be outsiders. Has the situation changed in favour of the local Arkhangai population?
I think it has. Mongol Gazar employed many under fraudulent contracts and I am glad such things will not recur. When I met with officials of Altai Gold and Bat Dolgoon Moron, who now hold the licences, I asked them to employ as many local people as possible and they agreed. We hope this will really happen. If problems related to gold mining are not settled soon, we may very well end up being in a situation like Zaamar.

With Altai Gold, Golden Hummer and BMKhS holding licences and Bat Moron Dolgoon waiting to get a licence legally transferred to it, we are optimistic that from now on reclamation will be conducted in accordance with law, mining operations will be performed without any breach of the law, and there will be no pollution of the Orkhon river.

We also expect these companies to meet their social responsibilities. They have been discussing with us how their operations can further development of the local community, and the best ways in which locals get the most benefit from their work.

I remember you saying in 2018 that you would put pressure on them to ensure that their activities had a positive impact on people’s life.
As you know, the aimag signs agreements on social responsibility with the companies, and we have been strict in our demand that the companies do certain things. In 2018, BMKhS spent over MNT160 million on renovating Tamir cinema, while Altai Gold spent over MNT100 million on repairing the front fences of the ger districts in the aimag. Other companies are also taking up such activities as part of their social responsibility and are going beyond the centre of the aimag to soums and bags.

From this year, 50 percent of the exploration licence fees and 5 percent of the royalty receipts are going to the Community Development Fund. How much of this will be allotted to the aimag and what do you think of the new practice?
This year, the aimag will receive MNT26.7 million from the first and MNT2.5 billion from the second.
Such allotment to the aimag is significant on several counts. It will help us spend more to meet the needs of the aimag and will also give more financial independence to the local community. With some money that can be spent as it deems fit, the local parliament can identify and prioritise local problems.

I would like to have your views on certain allegations against you. These are: one, that you and B. Osokhbayar, Speaker of the aimag parliament, issued a fake decree; two, that you two also claimed a resolution had been passed by this parliament while that body had in fact not held a session; and, three, you decided to allow artisanal mining operations in a 5-hectare area of the Shoron Ravine, Tsenkher soum.

I shall tell you what happened and how. The resolution in question was adopted by a soum parliament and forwarded to the aimag parliament Speaker.  When this proposal was submitted by the Speaker to the Mineral and Petroleum Authority, that organization replied that it would consider the proposal only if it came from the aimag governor.  That is why I submitted the proposal, in my official capacity, with a request for checking whether there was a confusion about the coordinates of the area now under question. Thus, the letter was on the basis of a resolution by the soum parliament. I have not yet received a reply, but I believe the soum has. I submitted a proposal, and did not take any decision.