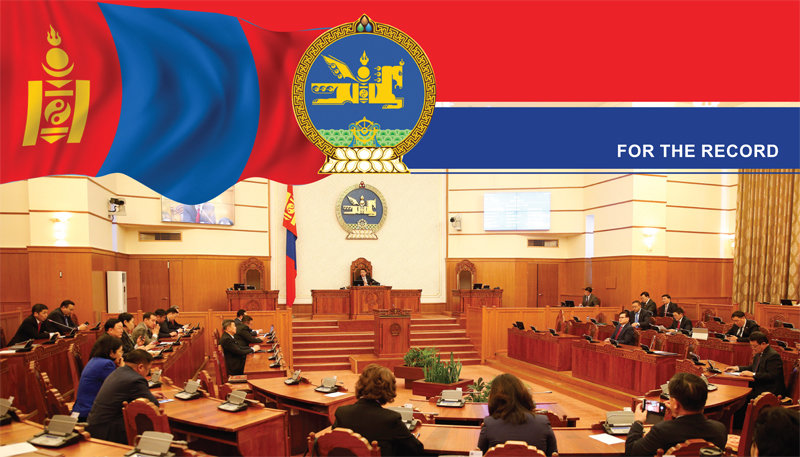 In keeping with the hot days of summer, Mongolians are carrying out a heated debate on amending the Constitution, though their mood is frequently not as sunny as it is outside. The Parliamentary Office has been collecting people’s opinions and views since June 25.  Members of parliament have been touring in their electoral districts, sampling popular response to the bill which, if approved, would give us a significantly altered Constitution on July 1, 2020, as promised in the Action Plan of the Mongolian People’s Party, which has majority in the present Parliament.

This is not the first time the Constitution has been sought to be amended in a major way, though all such efforts have failed up to now, for various reasons. The Constitution was adopted in 1992, to help establish a humane, democratic, fair and compassionate society and, more importantly, to encourage an independent political system in the country which had just recently decided to abandon the Soviet model. Since then, much has changed in the State and society of Mongolia; successes have been achieved, just as mistakes have been made.  Of course, not all of these can be traced to the Constitution, but that there have been seven successful parliamentary and six presidential elections in the past 27 years, and that power has always changed hands peacefully show the fundamental strength of the Constitution.

That is true, but many have also felt that there are some inherent inadequacies in the document that have led to political instability. We have had 14 Governments since 1992 and only two of them could complete their term. We have even had four governments during the term of one parliament.   A foreign investor is believed to have once lamented that a government here lasts only two years on an average, and most policies thus have a two-year life. No wonder, such frequent changes have a strong negative impact on foreign investment, hindering proper development of the mining sector.

The following are the four principal areas covered by the present proposed amendments:
1. Parliament’s rights and responsibilities;
2. Ensuring stability, sustainability and the accountability of the executive;
3. Ensuring the rights and independence of the judiciary;
4. Improving the local governance system.

Altogether 20 Articles, or 28.5 percent of the total number, are sought to be amended. One of the seven Articles amended in 2000 is sought to be restored and five of the others to be re-amended.  Explaining the rationale behind these proposed changes, Speaker of Parliament G. Zandanshatar recently noted that their aim is to enshrine the principles of equal distribution of social wealth and of ownership of natural resources vesting in the people. There would be more checks and balances in governance and parliament will have more powers. The proposed new system would also ensure protection of human rights.

Acknowledging that Mongolia’s economy is very much dependent on its natural resources, the amendments seek to provide some clarity on the nature of this relationship. As mineral resources have brought economic growth, this has created new conflicts between various groups wishing to be owners of mineral deposits.

These conflicts have spilled over to the political arena, often leading to crises.  More than a quarter of the population live in poverty, and supporters of the amendment feel this is because the present Constitution is silent on how revenue from the resources is to be distributed. They want the gap to be plugged by making the creation of the Nationwide Wealth Fund mandatory under the Constitution.

Article 6.2 of the Constitution reads: “The land, except what is given to citizens of Mongolia for private possession, as well as the subsoil with its mineral wealth… shall be the property of the State.” The words “the property of the State” are sought to be replaced by “the property of the people”. As such, any government will have to ask the public for its opinion when it wants to take any decision on natural resources. The following words are to be inserted in this Article: In mining the natural resources, the Government shall uphold principles of ensuring equality, honesty, security of the national economy and sustainable development. This and the move to redistribute mining revenue through the Wealth Fund will most likely be welcome by all.

As for the responsibilities and role of Parliament, it is proposed that each regular session is to be for 75 days, and that Parliament should be dissolved if not less than two thirds of the total members agree that it cannot function effectively. The President will order Parliament to be dissolved if a Prime Minister is not appointed within 45 days of commencement of its first session.  This is aimed at avoiding prolonged political uncertainty.

The Constitution is to be the bedrock of social honesty and integrity, and for this the judiciary must be independent and powerful. The recent arrest and detention of M. Enkhsaikhan, a former Minister, on the charge of attempting to give Tavantolgoi to China for 100 years, is a case in point.  Fortunately, a court was able to get him released after 24 hours, but not before people wondered if there was a complete breakdown of the rule of law. Here the court met people’s expectations but the general perception among citizens is that the judicial system is unfair and unreliable and soaked in bribery.  The proposal to establish a Court Responsibility Council will thus be welcome, but the same might not be true of the proposal to give longer terms to judges at the Supreme Court and the Constitutional Court. A 12-year tenure is proposed for the former, with no provision for earlier removal. A member of the Constitutional Court now works for 6 years, but the amendment proposes to give them a fixed 9-year term. Here, too, no matter what the merits of a longer term are, people might take it as unconditional privilege and guarantee of non-removal might very well be misused.

The proposed amendments call for soum and district governors to be directly elected by citizens, and not by members of the respective Citizens’ Representatives Khural (CRK). This, in a way, would make them more accountable to the people. Ratification of their election would be within three days instead of the present 15. In the case of aimag and capital city governors, however, the respective CRK will decide on a name and submit it to the Prime Minister, who will make the formal appointment.  This also has to be within three days.

Another set of amendments relates to the respective power and authority of the President and the Prime Minister. One-fourth of the members of Parliament will still be able to call for the resignation of the Prime Minister, but the decision has to be taken within three days of this move, instead of the present practice of the standing committees getting seven days to discuss the matter and then Parliament debating the issue within a further 15 days.

The Prime Minister’s resignation or dismissal will automatically mean the same for his government, all members of which have to follow him.  A major change is proposed in the way ministers will be appointed and changed. At present they are chosen by the Prime Minister in consultation with the President and then every name is ratified by parliament. The amendment gives the Prime Minister the sole right to choose his ministers and also to change/remove them. He takes the decision and then notifies Parliament and the President.

Another proposed change is that when at least one-fourth of the members of Parliament support any move to remove the Prime Minister, they should also make clear who they want to replace him. This could be perceived as encouraging political conspiracy, though those who prepared the amendments deny this and explain that if a change is quick, that would make things less uncertain and ensure continuity in government functioning. How much people will buy that argument is, at best, a matter of debate. Another amendment gives the government more power to decide on how to spend money from the budget, which now is the prerogative of Parliament.

As regards the President, the amendment gives him one single term of six years, with no provision for re-election. This is shorter than the eight years a President can now be in office, if he wins a second term after serving for four years. This might not please the present President who has been adding to his powers.

It is quite likely that the amendments would end up being submitted to a referendum. That would put a big responsibility on every single Mongolian. We do not know if, in the eventuality of a referendum, the amendments would be offered as a single package or every amendment will be judged individually, but if the amendments are not approved, there cannot be another effort to change the Constitution before another 8 years. For many citizens, it will be an existential problem: To amend or not to amend?