Miners pledge to be responsible 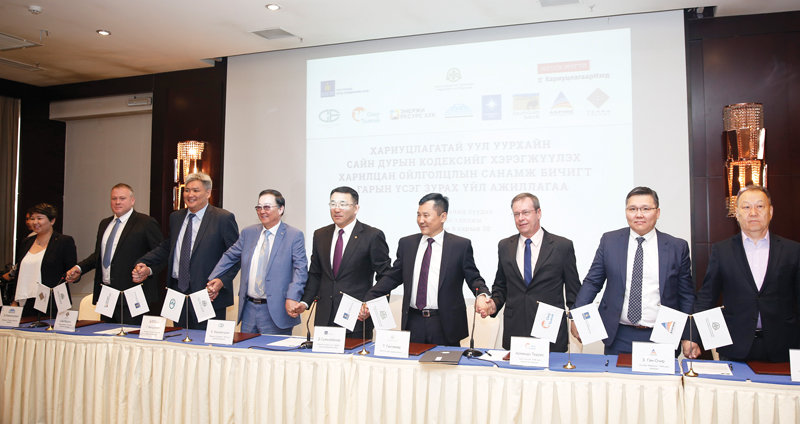 Major companies in the extractive industry in Mongolia recently came together to launch a campaign to encourage the practice of responsible mining. Among those who attended the meeting at Tuushin Hotel were those representing Oyu Tolgoi, Erdenet Mining, Energy Resources, Aspire Mining, SouthGobi Sands, Terra Energy and Baganuur. Later, they all joined the Responsible Mining Voluntary Code.

The campaign was initiated by the Mongolian National Mining Association (MNMA) and is to be implemented together with the Ministry of Mining and Heavy Industry. Those who joined the codex and signed a memorandum of understanding (MoU) included Kh. Badamsuren, Director General of the state-owned Erdenet Mining Corporation, Armando Torres, CEO of Oyu Tolgoi, G. Battsengel, CEO of Energy Resources, Z.Gan-Ochir of Aspire Mining, Ch. Munkhbat, President and CEO of SouthGobi Sands, Sam Bowles, CEO of Terra Energy, and O.Tuya, Vice Director of  Baganuur JSC. The MoU has 30 clauses in 5 sections. It includes the major requirements for responsible mining as identified by the MNMA.

According to the Report of the Extractive Industry Transparency Initiative (EITI) of 2017, the mining sector accounts for 23 percent of Mongolia’s GDP and 80 percent of total exports. The report noted that the government received revenue from 2,068 extractive industry companies, but according to the Mineral Resources and Petroleum Authority, there are 1,825 companies holding 2,983 mining licences in Mongolia. Erdenet Mining, Erdenes Tavan Tolgoi, Oyu Tolgoi, Energy Resources, Mongolian Gold, Tsairt Mineral, Tavantolgoi, Boldtumur Eruu Gol, Erdenes Mongol, MongolRosTsvetMet, Baganuur, Shin  Shin, Darkhan Metallurgical Plant and Osokh Zoos are among the Top 50 Companies selected by the Government in cooperation with the Mongolian National Chamber of Commerce and Industry.

Speaking at the meeting, D.Sumiyabazar, Mining and Heavy Industry Minister, stressed the need to have “responsibility in all sectors”, especially in mining. This is because mining is “the strongest pillar holding up the country’s economic structure, creating growth, generating jobs, and attracting foreign investment”. Oddly enough, there is widespread feeling among the general populace that “mining is all bad, causing the environment to deteriorate, and rivers and springs to dry up”, he said, adding, “There is need to provide the public with the actual and unbiased picture, backed by data.” The campaign, he was also sure, would establish healthy relations between the government and the private sector in the mining industry.

Talking of public antipathy, we have mining companies that spend money here, successfully issue international IPOs, offer professional skills training to local job seekers, and generate employment – all to Mongolia’s benefit. Among those who joined the responsible mining code and stand out as role models in the industry are: Erdenet Mining which has for long been the major contributor to the country’s economy; Oyu Tolgoi in which the Government of Mongolia and Rio Tinto Group are partners; Erdene Resource which has been exporting coal since 1997; and Energy Resources, a national company which helped local development by establishing a coal washing plant and a power plant.

The public never gets to know of much of the good work done in and by the mining sector. Instead, people are misled by false information purveyed by vested interests, bent on instigating local citizens against mining. Not that the mining sector has only saints. There are people, politely called “micro miners,” who engage in illegal mining, which is a crime – very widespread and well-organized, but still a crime. Extracting state-owned wealth illegally and without permission remains a criminal act, whoever does it.

T. Gantumur, President of the MNMA

Having defined that the mining sector will play an important role in helping Mongolia overcome the difficult times of the transition and revive its economy, we started to implement the Gold Programme by attracting foreign investment in the deposits, and that is how and when the private sector entered the minerals field. Since then, social demand has grown to make the mining sector responsible.

All know that the responsible mining sector ensures Mongolia’s economic security, independence and sustainable development.  However, the sector has always faced discrimination. The distrust, at one time restricted to the public, is now strong at the political and decision-making levels. Informal miners and “ninjas” are working totally without a sense of responsibility. Inspection organizations cannot do adequate monitoring. All this has led to the belief that the whole mining sector operates not in accordance with laws, but unfairly and is “bad.” Also, domestic small and medium mining companies ignore their social responsibility.

The companies which have joined the campaign are the sector leaders and all are known for the responsibility with which they act in five crucial areas: good governance and transparency; programme relations and the right to be employed; occupational safety and health; environmental protection; local community development and public involvement.  We expect that there will be certain good results from implementation of the initiative and programme, and from their joining the Responsible Mining Voluntary Code. As people come to learn how these companies help the country through responsible mining, they will develop admiration not just for individual companies but also respect for the entire sector. As the companies get known for their sense of responsibility, any biased criticism of them will be dismissed. They will face less pressure from the public and from inspecting and regulatory organizations. With time, the performance of the companies will achieve a new level: they will do self-assessment; all that they do will meet international standards. Cooperation among companies will be strengthened as they together implement the Voluntary Code, sharing experiences and information with all. Citizens will have a more positive understanding of the mining sector’s responsibility and how companies earn the social licence to prosper. There is scope to involve the numerous small- and medium-size enterprises in the project. Even larger companies which have poor understanding of their own responsibility and which pay little attention to this will follow them. With this, many more companies will have improved governance and better internal management. The reputation of Mongolia’s mining sector will transcend national boundaries and go international.

During the event, A.Bilguun, MNMA, introduced an interesting study.

He highlighted that this brief study collected statistical data and conducted third party analysis and sought to answer the following questions: How, why and where did the negative attitude in Mongolian society to the mining sector originate? The factors are divided into three groups:

Firstly, psychology, traditions and the linguistic identity of Mongolians. Any issue is understood differently depending on the angle of interpretation.  For people who live in an eternal relationship with nature and have a nomadic lifestyle, mountains are sacred entities. But the Mongolian word for mining also means “excavating mountains”. Thus the citizens’ subconscious resents that the mountains are excavated or dug out, and when companies export minerals, Mongolians see it as their wealth being removed. Things are not improved by the ease and abandon with which people who engage in illegal mining pollute the rivers.

The National Statistics Office reveals that two years ago, the number of livestock reached 60 million. Before 1990, the norm was to have one goat to three sheep, but today, herders have them in equal numbers. According to experts in animal husbandry an increased number of goats will surely destroy grazing land.

Let us turn to the agricultural sector which works in close relationship with mining, though, in popular saying, “one grows, the other digs out.”  Again according to National Statistics Office data,  agriculture accounts for 72.39 percent of the entire territory and contributes MNT2.88 trillion to the GDP, while mining accounts for 0.20 percent of territory and contributes MNT6.53 trillion to the GDP. These sectors share natural resources such as land and water and the growth of agriculture could make one wonder how much soil the mining sector actually degrades.

Thirdly, the time has come for the mining sector to take a close look at itself. There are things wrong there. Placer gold deposits are located along the rivers in the northern part or the “green” zone of the country. Activities of illegal miners do pollute the rivers, and at times even lead to human death.

Today the leading mining companies are united and have pledged to jointly implement the Responsible Mining Volunteer Code. Let’s be an example with our right and responsible activities. With these goals set forth, they launch this initiative and the programme.