Railways will be on Putin’s agenda 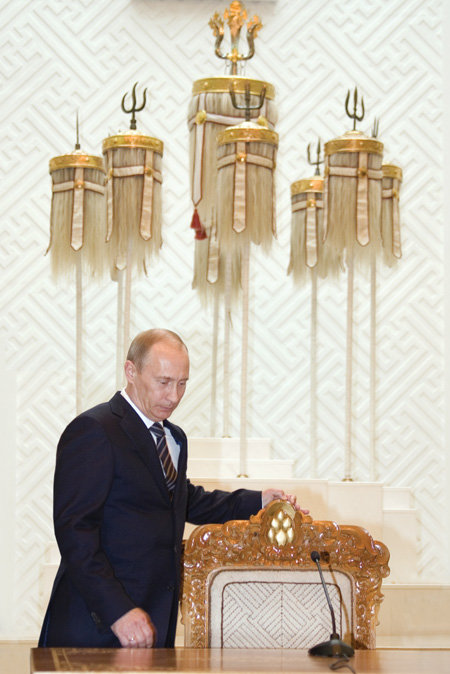 Russian President Putin will be in Mongolia to attend the 80th anniversary celebrations of our two countries’ joint victory in the battle of Khalkh Gol. The visit is expected to take bilateral relations to a new phase and there is talk that a comprehensive strategic partnership agreement will be signed during the visit.

Much has happened in the five years since Putin was last here.  For example, the agreement to establish the Mongolia-Russia-China Economic Corridor was signed in 2015 at Tashkent; Mongolia and Russia signed a 25-year interim discount tariff agreement for railway transit; Russia re-opened a transport corridor through its territory after nine years; and a consortium of Russian companies led by Russian Railway made a bid for the Tavantolgoi deposit along with global mining giants; and when coal prices were at their highest ever, Mongolia made a special offer to the Russian side.

Coal might be losing some of its importance, and at this time when commodity prices are declining, Russia’s offer of cheaper transport for Mongolian minerals along the 4,000-km route to its seaports might not hold much interest for us. However, it is necessary for Mongolia to have a seafront in the north, and that is why the Zuunbayan-Khangi and Erdenet-Artssuuri routes have been included in the State Policy on Railway. Currently, the Tavan Tolgoi-Zuunbayan railway is being built under the special attention of the President of Mongolia. As the Russians hold 50 percent of Ulaanbaatar Railway, their interests are seen in these three directions.

The agreement that was signed following President Putin’s visit in 2014 said, “The Salkhit-Erdenet part of the railway will be continued in the north-west direction to the border of Mongolia and Russia, thus opening a new railway link to Russia and connecting Mongolia to Kyzyl in Tuva, thereby creating a new route to export Russia’s mineral products to China through Mongolia.” The Kyzyl-Urumchi route has long been seen as the cheapest way for this. Another option is to use the Erdenet-Artssuuri route to reach China’s industrial hub through Salkhit-Erdenet and the UBTZ central corridor. Both are included in the 32 projects of the economic corridor.

The Russian interest in these routes stems from their hope and plan to sell coking coal from the Ulug-Khemsk basin -- which is twice as large as the Tavan Tolgoi deposit -- to China. Putin has indicated the importance of the project by, first, reviving it after a 10-year freeze, and then by keeping personal tab on it. Russia has taken up an ambitious plan to invest 2 trillion rubles into Krasnoyarsk province, Tuva and the Khakas region over the next decade. Around 60 companies -- including Norilsk Nickel, Rusal, Polus, SUEK, Russian Railways, En+Group and Unipro – will participate in the plan by setting up as many as 32 large projects, including mineral deposits, processing plants, roads, energy production, airports, infrastructure and agriculture.  Russia plans to extract 200 million tonnes of coal annually from the regions of Zabaikal, Tuva, Khakasi, Yakutia, Novosibirsk, Krasnoyarsk and Kemerov to, first, increase its exports to Asia-Pacific countries and, then, to compete with Australia and Indonesia in the world coal market. This is a priority of Putin’s long-term economic policy.

That is likely to be near, if not at the top of, Putin’s agenda when he sits down for talks with Mongolian leaders. He knows that Russia must have unimpeded access to this planned shortest route passing through Mongolia to China’s industrial centres. As the railroad is not yet ready, he would like to hasten the work of maintaining, expanding and upgrading the existing routes. This was made clear in the cooperation agreement signed five years ago for the renovation and strategic development Ulaanbaatar Railways, which would enable it to transport 100 million tonnes of freight annually. Russia agreed to finance the work only after making sure how its own interests would be furthered by it. Much is still to be done and Zamyn-Uud port is overloaded, but the capacity of Mongolian Railway to transit freight has increased fourfold in the last two years.

Many in Mongolia are upset that transit transport is growing so rapidly at the cost of moving our own export cargo along a railway. Today, no Mongolian coal is carried through Russian territory, but Russian freight is reaching China through Zamyn-Uud at a 60- percent discounted tariff. Russia now wants to talk about another exit point to make more use of this favorable condition. This would be at Khangi to the west of Zamyn-Uud, to be reached through a Zuunbayan-Khangi railway, a project the Russian President highlighted at a tripartite meeting in Bishkek. A railway from Zuunbayan to Khangi will serve the interests of Russia and China, with no benefit to Mongolia. However, the other neighbour has a somewhat different perception about the second exit point for Russian freight. Russia prefers Khangi as that would keep the traffic under the control of Ulaanbaatar Railway, but China wants Mangal as the place, and has proposed to develop Ulaantsav aimag as an international transport and logistics center. This means transit cargo will use Erlian port, and that is why China has offered a 50% discount on transit tariff for Mongolian freight through its territory beginning at the Erlian border.

The State Policy on Railway stressed that the railway to Khangi-Mandal port will become a new gateway to increase mineral exports and to ease the current burden on ports in southern Mongolia. Mongolian producers, however, see the present route as the fastest for Tavan Tolgoi coal to reach its buyers. Since Tavan Tolgoi will remain the main competitor of Russian coal projects, proximity is an advantage not to be squandered away. This is so now when the coal goes by road and it will be the same when the Tavantolgoi-Gashuunsukhait railway is finally ready, hopefully some time next year.

MMJ welcomed the Russian President in 2014 with an article headlined “Putin is a leader who comes with a surprise”. The circumstances now are changed and though Mongolia welcomes Putin with the same old warmth, maybe it will be a little more wary of what he could demand from us. The talks he will be holding here do not necessarily have to lead to an agreement as, soon after, the President of Mongolia will be in Vladivostok to attend the East Economic Forum, where he will have more talks with his Russian counterpart. There is one word in Russia: Восток дело тонкое. (The East is a delicate matter). That continues to be true.