O.Badarch, Governor of Tsogttsetsii soum in Umnugovi aimag, tells Ch. Sumiya that while mining has brought prosperity there and to the 20,000 people now calling it home, its negative impact on the environment is taking disastrous proportions. 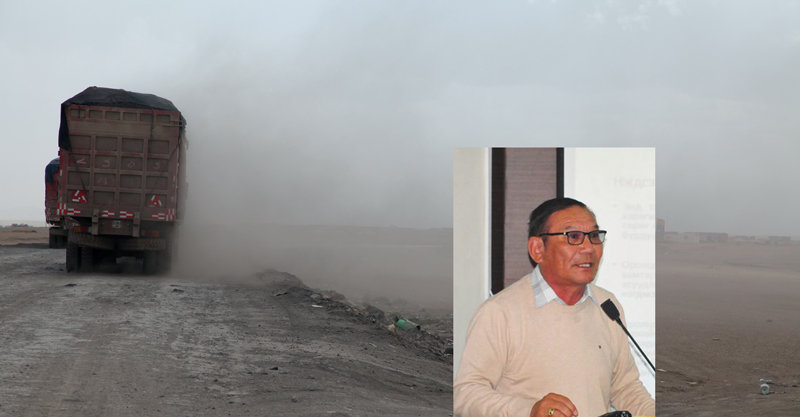 How many mines are active in Tsogttsetsii soum?
Our aimag has 15 soums, and Tsogttstetsii is the smallest of them, only about 7,000 square hectares. Some 16 percent of this is under mining licences. Three large projects -- the State-owned Erdenes Tavantolgoi, the locally-owned Tavantolgoi, which is the first mine of the aimag, and the privately-owned Energy Resources -- are extracting at the Tavantolgoi group of deposits, together exporting about 20 million tonnes of coal annually. There are 20-30 subcontractors removing soil.

What has been the negative impact of their operations?
There is no denying that work in these mines has brought about economic development, but if living standards have improved, the local community has also seen its quality of life badly affected. About 20,000 people now live here because of the commercial opportunities offered by mining, some holding jobs in mines and some providing services and running businesses. It was a soum where the nomadic culture was dominant and where animal husbandry was the main economic activity. That is still there, but the share of animal husbandry production in the economy is now negligible when compared to that of mining and heavy industry.

The air pollution caused by mining affects the life and health of all residents of the soum. Another environmental disaster has been the soil erosion, which has led to deterioration of pastureland and damage to the local flora. Actually, the whole ecosystem is being harmed, with water causing the most concern. We have put the cart before the horse. Large scale mining should not have been started before building infrastructure and creating a positive mindset among people. We have done things exactly the other way.

Umnugovi is special in that it spends over MNT 160 billion annually from its own funds, while contributing another MNT 100 billion of what it gets from mining to the state budget. The aimag focuses on local construction, but there are a lot of other issues.  We accept that exporting more coal is very important for the economy, but several things related to mining operations should be reviewed at the government level. This is the biggest challenge we face.

Coal from the Tavantolgoi deposit is being processed and taken to Ulaanbaatar to reduce the pollution there. Local citizens are protesting that the continuous movement of heavy-duty trucks used for this is destroying the pastureland and raising dust all along the way. What position does the soum have on this?
I do not oppose the government step to reduce smoke in Ulaanbaatar, our national capital where 50 percent of Mongolia’s population live, but at the same time I deplore that nobody is thinking of mitigating our concern. Transporting coal along unpaved roads must stop, and the administration of the soum, local herders and ordinary citizens all demand that the coal be carried in a way that does not raise a storm of dust, day in and day out, if there is to be no environmental disaster. My position is to immediately upgrade about 15 km of the haul road. Currently, a 59.6-km road from the highway to Tsogttsetsii soum is under construction and should be opened to traffic in November. This apart, the Governor’s Action Plan includes building 35 km of paved road in areas where there is most dust is caused. Money has been found for a 23-km segment of this road. If Erdenes Tavantolgoi builds a 10-km road to Tsankhi village, the northwest of the soum will have significantly less dust than now.

The problem of dust is really difficult. All the measures so far adopted against it have failed. Two years ago, a Human Rights Commission (HRC) team from Ulaanbaatar came to Tsogttsetsii soum and conducted a study on the effects of so much dust on human health. The soum has appealed to several international organizations for help but without success. Now we hear that the HRC report on social issues arising from mining operations has been presented to the Prime Minister. We hope to receive a copy of the report and also hope that a positive and concrete course of action will be adopted as long-term policy.

Respiratory diseases are the most common major disease in Tsogttsetsii, followed by gastrointestinal diseases and cancer. The air pollution that contributes to most respiratory tract diseases is largely a result of mining, though there are other factors also, such as drought and wind, both of which break the soil in the Gobi and raise dust. Also, the soum now has many more motor vehicles than before. There is also a great deal of dust inside the mines, though this is not seen from outside and so is not much talked about. My demand is for measures to tackle the problem comprehensively.

How do mining companies address the concerns of herders in their areas of operation, such as Tsagaan-Ovoo bag?
Tsogttsetsii soum has 2500 households, of whom 300 are herding families. Energy Resources has taken successful measures to mitigate the problems of families settled in its mining impact zone. A proposal has been presented to the management of Erdenes Tavantolgoi to take into special consideration the situation with the 20 herder households in the mine’s impact zone. The company has an office in the soum and has signed an agreement on cooperation with the aimag and soum governors. This agreement has made it possible to resolve several problems faced by such families, such as repairing and erecting fences, and drilling wells.

Given the problem of water shortage in the Gobi, how do you hope to reduce water consumption by mines?
Surface water is scarce in the Gobi and our life depends on ground water.  We need to have a policy on water management, which would cover industrial water consumption, household water use, pasture water supply and water for reclamation. The policy will also ensure that less water is used in mining. Since Tavantolgoi is part of the Galba-Oosh Dolood basin, it would be part of a water management plan.

How seriously committed are the mining companies in the region to reclamation?
Usually when mines exhaust the reserve in a few years, they fill the holes they dug and take up technical and biological reclamation, but the situation is quite different for the mines operating in our soum.  They hope to excavate for 30 to 40 years, and the final mined area will be too deep and extensive to be filled in. The people’s opinion should be sought on whether the area is to be made into an amusement area, or a lake or a green zone. The closure plan has to be prepared accordingly. Reclamation should be carried out annually but, actually speaking, many mines do the work without proper planning, just planting some trees or doing something similar. Both the local Tavantolgoi and Energy Resources have started reclamation work in an area close to the Tsetsii Mountain, as suggested by the soum administration, but Erdenes Tavantolgoi is yet to make a move in this direction.

How do those who work on strategic deposits cooperate with the soum and local communities?
There are problems. Recently, a company called Strato set up a processing plant in Govisumber aimag and planned to take coal from Tavantolgoi there. It would have been illegal in my opinion. The heavy trucks will degrade our land and popular protests have so far not allowed any coal to be transported.