An independent law is needed for developing the extractive industry report 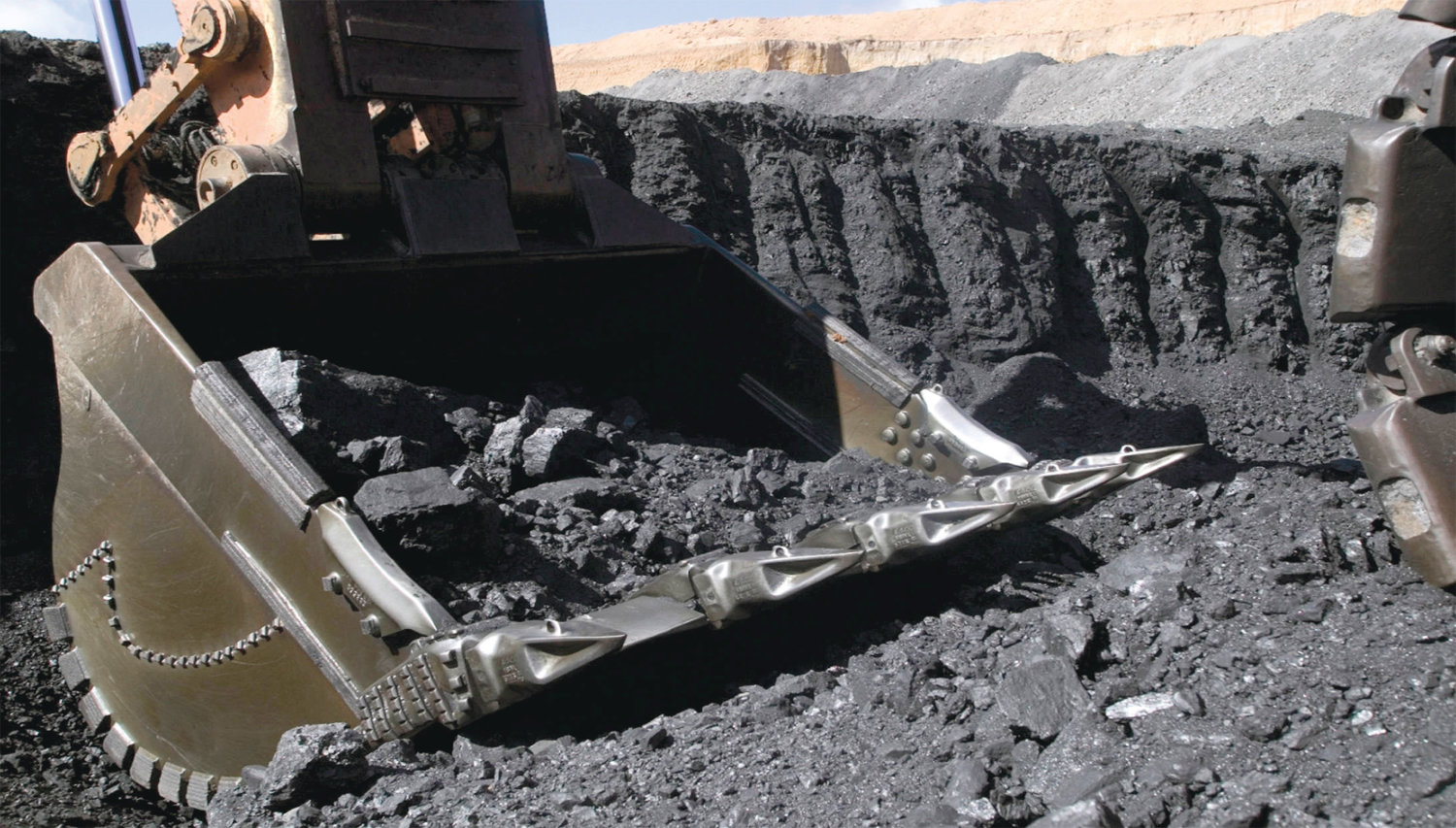 The Mongolia’s Extractive Industries Transparency Initiative (EITI) 2020 report has been released. Due to the pandemic in 2020, the report was based only on 60 companies engaged in gold, copper and coal production. This is the 15th report prepared by Mongolia since joining the initiative. Grant Thornton Audit LLC was appointed as the Independent Administrator for the report. The company prepared a reconciliation report of the material payments made by companies to the Government in 2020 and the revenue stream received by the Government in accordance with the EITI 2020 standards between 6 August 2021 and 25 November 2021.

Mongolia began disclosing beneficial ownership information since 2013 under  EITI. At that time, information on the final owners of 214 legal entities was disclosed on a voluntary basis, and this number was more than three  times greater in the 2020 report. But this is not enough.

The companies that disclosed their beneficial owners contributed 881.4 billion MNT - only 21% of the country’s budget revenue stream. In other words, the mining companies that account for the majority of the state and local budget revenues have still not revealed their owners. 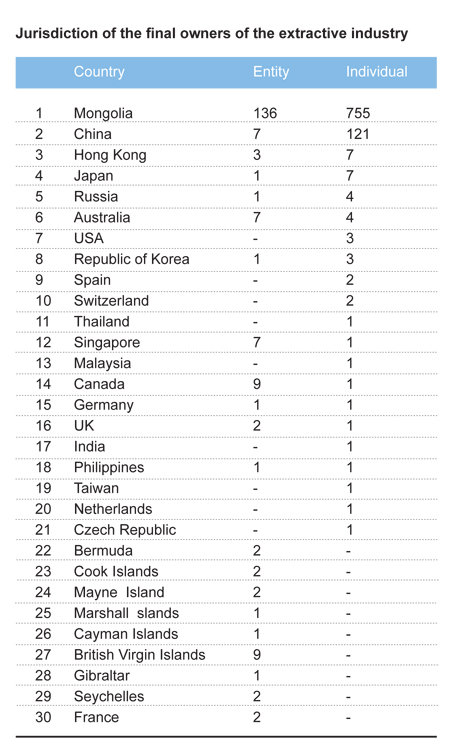 Under the EITI initiative, Mongolia set a goal to publicly announce the names of beneficial owners of all companies in 2020-2022, but has not yet achieved this goal. The EITI secretariat believes that the main condition for achieving this goal is the adoption of an independent law to ensure transparency in the mineral resources sector. Initially, there was an expectation that the Law on Transparency in the Minerals Sector would be submitted to the Parliament for discussion last autumn.

At the same time, the Annual Reconciliation Report recommends companies and government agencies to submit EITI reports regularly and ensure the accuracy of submitted reports. But no significant progress has been made, indicating the importance of enacting and enforcing the Law on Transparency in the Minerals Resources Sector.

Revenues from the mineral resources sector reached 2.6 trillion MNT, down by 247 billion MNT or 8.4% (in 2020)  compored to 2019, according to the National Statistics Office. The extractive sector revenue is about 600 billion MNT higher than the NSO data, due to multiple revenue streams outside the budget, which were covered in the Reconciliation Report 2020.

Analysis made after the reconciliation of payments reported by companies with government receipts confirmed that 78% of all payments made by extractive companies in 2020 were made by the top ten companies (compared to 85% in 2019). Payments from the top twenty extractive companies represented 82% of amounts received by government from extractive companies (93% in 2019). The contribution of top taxpayers declined in comparison to the previous year, according to a flexible 2020 report which involved gold, copper and coal mining companies. This was caused by a sharp drop in raw material prices in the first half of 2020 due to the adverse effects of the COVID-19 pandemic. 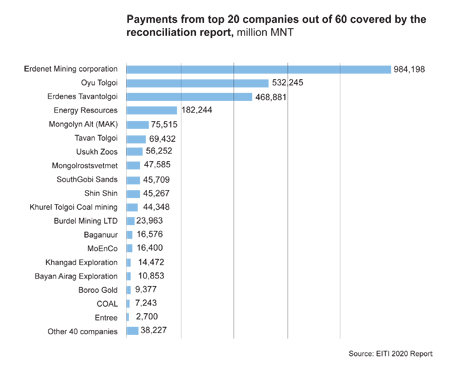 The payments made to  state and local budgets by 60 gold, copper and coal producing companies (including five SOEs) selected by the Multi-Stakeholder group for the EITI Report were compared with the 43 government agencies’ receipts (including 28 local state organizations).

The National Audit Office is required to validate reports for EITI submitted by government organizations. Article 15.4.2 of the “Procedures for auditing financial statements” adopted by the National Audit Office states that “the payments made to the budget by extractive companies shall be verified with the EITI Secretariat and the government agencies that received the revenue and accompanied by the relevant conclusions”. However, this inspection task has not been carried out so far. This will be the next step.
The independent Administrator found that the government reported receipts from 2,543 companies in the electronic reporting system, of which 180 companies’ reports were in duplication. Therefore, it is important to improve this system and submit company names without duplication.

Transfers from General Local Development Fund and the state budget to aimag and capital city’s LDFs were estimated to be 172.6 billion MNT in 2020, of which 165.7 billion MNT has been transferred to the LDFs. 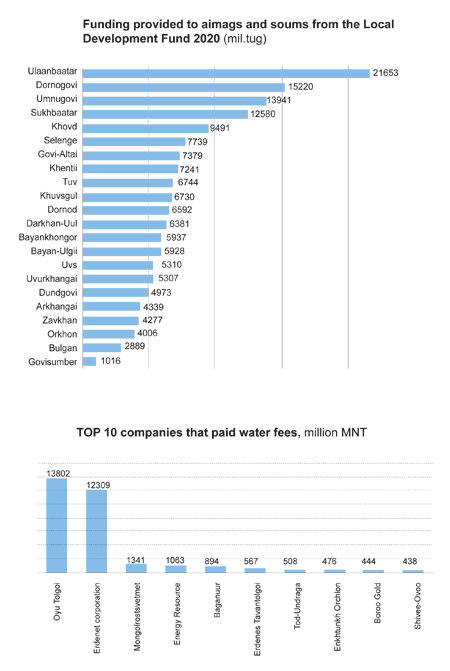 The extractive industry is a key sector of the Mongolian economy and has been a major source of economic growth. In 2020, the extractive sector represented 21.6% of GDP and earned $6.6 billion in exports of key mineral products. The mining sector accounted for 56.5% of total industrial output in the same year.

The mineral sector accounted for 25.7% of Mongolia’s budget revenue in 2020.

In 2020, 141 reports on exploration results were submitted and 132 reports were discussed and accepted. Exploration license holders spent 86.03 billion MNT on geological and exploration work in 2020, a decrease of 39.2% from 2019.

The Extractive Industries Transparency Initiative (EITI) is a global standard for improving transparency and accountability in the oil, gas and mining sectors. The Government of Mongolia announced its acceptance of the EITI in 2006.

The EITI Standard was approved by an EITI International Meeting held in Lima, Peru on 24-25 February 2016. This standard is characterized by the requirement to disclose information about individuals who own and benefit from mining activities. This required all countries to ensure that companies participating in mining tenders, operating and investing in mining projects report the identity of their beneficial owners.

The EITI revised standard in 2019 addresses the implications of global issues such as environmental impacts, and social and gender equality. It also obliges countries participating in the initiative to disclose mineral sales, project reports and all contracts signed after 2021.