A wealth fund too many? 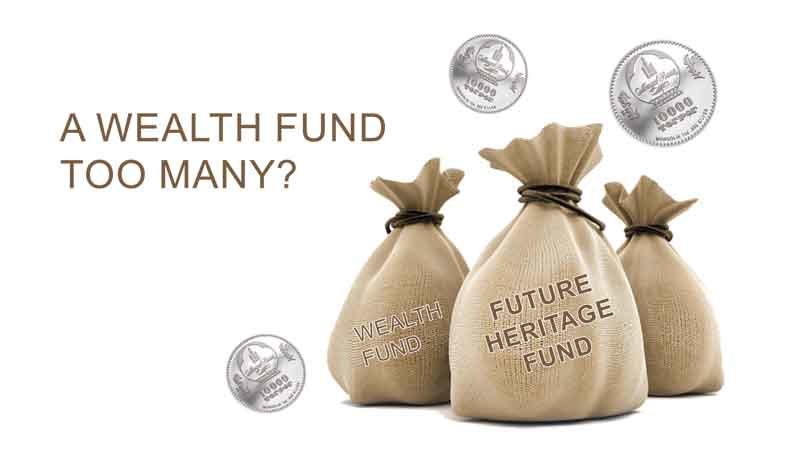 Even months after Erdenes Mongol announced that it had finished work on the draft law on the wealth fund, the document remains elusive. It is not in the public domain, and every professional I asked said they had no clue where it could be seen. Some even ventured to wonder, and only half in jest, if the only persons who know what it contains are the members of the working group established to prepare it.

Yet a year and a half ago, the media played it big that this group, chaired by the head of the Cabinet Secretariat, L. Oyun-Erdene, had finalized the draft. The then Director of Erdenes Mongol, P. Gankhuu, announced that he would submit it to Parliament soon, and that is the last we heard about the draft. The pre-election Mining Minister, D.Sumiyabazar, who was keen to get the wealth fund law passed under his remit has been reluctant to talk about it since he was kept out of the new government and Gankhuu, who was praised for his hard work on this matter, has been replaced, somewhat abruptly, by D. Khayankhyarvaa, a former member of Parliament, who thus becomes the seventh Director of Erdenes Mongol, the company that would manage the proposed wealth fund.

Whatever the present status of the draft is, it will have to be approved by Parliament, after MPs discuss it, in the autumn or the spring session. But that is where the process ends. Before that, any draft law must be posted on the official website and kept there for at least 30 days to allow for public comments. The preparing group is expected to note these comments and judge if they need change the draft accordingly. Then it will be discussed by the Government and then submitted to the Parliament.

The guiding principle of the draft should be the Constitutional injunction that the use of natural resources is to be based on a long-term development policy and that the monetary gains from such use would be put into a national wealth fund for equal and equitable distribution among all the people. The constitution also says that there should be a clear law setting out how the people would benefit from such use. Since all Mongolians stand to benefit from the country’s “wealth” in the form of these resources, it is imperative that they know what the law on the national wealth fund is proposed to be and given a chance to express their views before it becomes law.
Since there is no word from the Government on the status of the draft, it may well be that there are second thoughts about setting up an altogether new fund. Will it be more prudent to make the present fund, the Future Heritage Fund, more efficient and productive? The draft has been prepared under the Santiago Principles, and their application to the working of the existing fund will surely make it more receptive to our needs.

So far, our experience of wealth funds has been disappointing. We called it The Human Development Fund but politicians chose to overlook the implications of the name, and instead used it as a source of cash handouts, creating a debt burden on the economy. Disillusioned with its poor governance and political manipulation, we next set up The Future Heritage Fund, and the law to govern it came into force in 2017. Money will be accumulated in this Fund until 2030, and after that 10 percent of the net investible income would be spent each year. Before that, however, a number of issues would have to be addressed, such as the legal status of the fund’s ownership and the ambiguity in certain regulations. The sources of funding are not guaranteed at present, and the legal status of the corporation in whose name investments would be made in foreign stock markets is unclear.

Some analysts and observers do not favour too many changes in the way the heritage fund is now mandated to be managed. They think there are other ways to make the management efficient and profitable. According to them, a separate and new wealth fund, from which money can be quickly taken out to directly finance domestic projects, would make these inefficient and weakly controlled, and there will always be the risk of investable funds drying up midway if commodity prices fall. All this can go into the Future Heritage Fund, but if another fund is set up, maybe this amount would be split equally between that and the heritage fund, affecting the stability and strength of both. Maybe it would make more sense to keep the present Future Heritage Fund as our only wealth fund, but instal a better and more foolproof mechanism to see that the money is appropriately and professionally used for the benefit of the present and future generations of Mongolians.

The Future Heritage Fund was planned in the mould of the very successful Norwegian Wealth Fund. That fund makes all its investments outside Norway, not using its resources for any domestic purpose. The proposed National Wealth Fund follows the model of Singapore’s Temasek, which is very different. It is difficult to see how the two can coexist in a country like Mongolia, with a small budget, a tradition of poor governance and strong corruption. As protection against the last two, it is legally mandatory to have an experienced foreign team to manage the Future Heritage Fund, but we do not know if there would be any such provision in the law on the new fund.

There are of course those who think that while the Future Heritage Fund brings in benefits from investing abroad, the proposed National Wealth Fund is needed to ensure a fair distribution of wealth without much more delay. Regular dividends distributed to every citizen would increase the living standards, and the rest of the money can be used on building infrastructure, creating jobs. It can boost economic activity and thus growth by investing in shares of companies, helping build a base for the stock exchange. Its resources can be judiciously used to help set up processing plants based on strategically important mineral deposits. There must be a legal mandate for this fund to support the growth of the middle class and the increased purchasing power of more and more people will create demands to meet which small and medium enterprises would mushroom. At present the state has limited capacity. For example, the Tsagaan Suvarga deposit has been, or will possibly be taken over by the government, but does it have the money to develop such a big project? In all this, the proposed fund would be like the Development Bank, but with the difference that the law would ensure that it is run professionally and independently.
After so many missed chances, Mongolia cannot wait any longer to develop, but the money accumulating in the Future Heritage Fund cannot be touched until 2030. In the case of the proposed new fund, the law would keep 50 percent of its money untouched, but allow the rest to be used for economic growth. This would be done mainly in two ways. First will be direct financing of, say, the Asgat silver deposit or some other major strategic project. The returns would not be immediate but they would be big when they come. Second will be buying shares of sound foreign companies so that dividends are good and regular.

If there is a moratorium on taking out money from the new fund, it will have an estimated corpus of MNT44.1 trillion in 2028, mainly made up of profits from strategic deposits owned by Erdenes Mongol, royalties and other taxes, and income from product sharing agreements. According to the 2019 introduction to the draft law, if investment is made in 15% government bonds, the fund could have as much as MNT3,216.2 billion in 2028. Erdenes Mongol will develop a three-year plan for the placement and investment of money from the wealth fund. Parliament will have to approve it together with the state budget for that year. The draft also envisages the establishment of a contingency fund mase up of a certain percentage of the fund’s total assets, and the opening of a special account at MongolBank. The fund’s assets will be reported and monitored in accordance with the Budget Law and the State Audit Law. Everything will be done strictly according to the 24 benchmark principles of international wealth funds.

Erdenes Mongol is regulated under the Company Law on the one hand and under the State Property Law on the other. If the draft law on the national wealth fund is approved, several laws will have to be amended, such as the Budget Law, the Minerals Law, and the Law on State and Local Property. It is unlikely that the National Wealth Fund will work efficiently without any improvement in the governance of Erdene Mongol, the largest de facto state-owned company which would manage the fund. It is clear that the government is forcibly taking over deposits like Salkhit and Tavt and putting them and others under Erdenes Mongol with the sole purpose of getting more money into the wealth fund. It is clear that several other deposits, in whatever state of activity, would be handed over to Erdenes Mongol.

That does not necessarily mean that more money would come to the new fund. Owning assets and running them profitably are not synonymous in a market economy. The first thing to do, if this is the true and ultimate goal, is to amend the Law on State Property. This should be a comprehensive reform to meet the needs of changing times and of inclusive economic growth. Without this, there can be no good corporate governance and there can be no good corporate governance also when CEOs are installed without any information to the board. We wish the new Erdenes Mongol head, D. Khayankhyarvaa, well but neither we nor he should be surprised if he is asked to resign in two years’ time. That will most certainly not be the proper way to run the proposed new wealth fund.