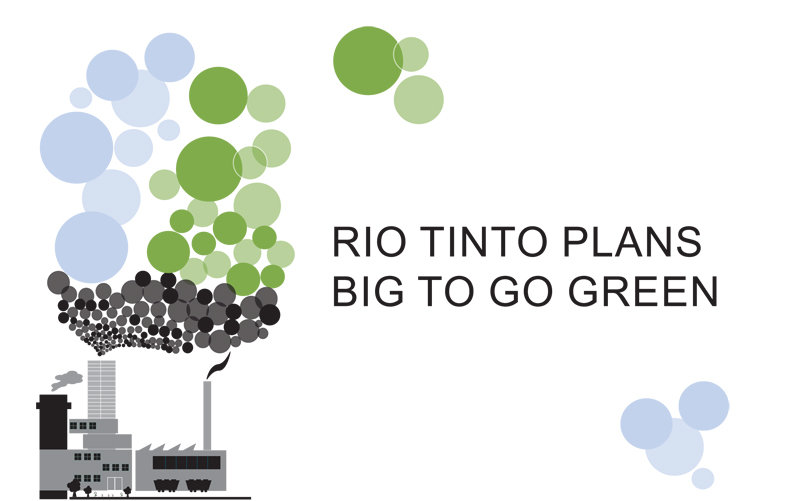 In keeping with its position as the world’s second biggest mining company, Rio Tinto has been taking several bold steps to halt contributing to climate change. With the divestment of its last coal project in 2018, it became the first major company to have no fossil fuel asset. This was also when Rio released its first climate change report titled ‘Our approach to the climate change 2018’. This has now been followed by “Our approach to climate change 2019”, which was released in February this year. In this Rio sets out its goal of achieving zero emission from its operations anywhere by 2050. That would cover both direct and indirect emission – in scientific parlance, Scope 1 and Scope 2 emission. CEO Jean Sebastien Jacques has said that the company will spend up to $1 billion in the coming five years on strategizing and getting ready to take up projects to reach the lofty goal.

A beginning was made some time ago when Rio announced plans to reduce by 2030 its carbon intensity by 30 percent from the 2018 level. Actual/absolute emissions will be reduced by 15 percent or 4.8 million tonnes. Such short-term goals are not taken too seriously by climate change activists but on several occasions Rio has shown that it can overperform or reach the expressed goal earlier than scheduled. The company’s emission level in 2019 was 46 percent less than in 2008, but this is not quite accurate a picture as the intervening years had seen divestment of Rio’s coal assets. If they are excluded, the drop would be 18 percent. As for carbon intensity, it was reduced by 29 percent, though the target had been a 24% drop by 2020.

Currently 76 percent of the company’s total energy consumption comes from renewable sources. Rio Tinto owns Escondida, the biggest copper mine in Chile, and Kennecott copper mine in the US. In both places, all the electricity is now sourced from wind and solar power plants. Rio’s goal is to use lower-carbon vehicles and equipment such as those used in drilling in all its mines. Among the projects where Rio is to invest in 2020 is a 34-mw solar power plant with energy storage facility, at an estimated cost of $98 million, at the Koodaideri iron ore project in Pilbara, Australia.

Rio Tinto’s climate change strategy will work in four directions -- extraction of essential minerals which is important for the low-carbon future, reducing the carbon footprint of its operation, partnership with research organizations to reduce the carbon footprint across its value chain, and enhancing its resilience to physical risks related to climate change such as flood, cyclone, etc. The company will cooperate with local governments, private entities, and clients. Jacques has emphasized that while new technology, partnership, and effective government policy will be crucial if it is to reach the goal, “there is no clear pathway right now for the world to get net zero emissions by 2050”. Why, then, did the company set itself such an ambitious goal? Maybe the impetus came from the EU announcement that it would reach a zero emission level by 2050.

Reactions to Rio Tinto’s announcement of its goals have been mixed. The natural resources consultancy Wood Mackenzie called these small steps, but has also found them “significant” and in the right direction. An Australian environmental NGO, Market Forces, is disappointed that the focus has been put on energy efficiency and energy saving, but not on a comprehensive and sustainable vision. It wants Rio to reduce its emission level by 30 percent in the next 10 years, which is the goal set in the Paris Agreement, which the company joined in 2015. An analyst at UBS Bank has not been impressed. Pointing out that its aluminium smelters are responsible for most of Rio’s greenhouse gas emissions, Glyn Lawcock has said that Rio can fulfil its 2030 target even now if it closed them in Australia. Closing such facilities at Pacific Aluminium alone  would lower the company’s emission level by about 25 percent. Rio is aware of the problem and is jointly working with ALCOA to develop an aluminium smelter technology with no emission. Another big cooperation is with Baowu Steel Group and Tsinghua University to study the feasibility of a lower-emission steel supply chain.

Now that the Mongolian Government will be building the Tavan Tolgoi power plant, it is idle to speculate why the mining giant on the fast track to be a fully green company decided on a coal-based facility when submitting its proposal for a plant to meet the power needs of Oyu Tolgoi. Was it only a question of costs, as Jacques once told this reporter when asked to explain the anomaly?

Rio Tinto is still free to meet part of OT’s power needs from renewable sources, and it would do so if it honours shareholders’ sentiments. Besides, the investment agreement calls upon the investors to be environmentally prudent. Rio Tinto could very well go for solar or wind power plants with energy storage facility sometime in the future, but all this would depend on how its negotiations with the government and the many other stakeholders go.

The present practice of Rio is to report emissions from assets it manages, but from this year, this will be done on an equity basis. That would mean adding the equity share of managed joint ventures such as parts of its Pilbara operations, Boyne Smelters and Oyu Tolgoi, as also including Rio’s share of non-managed joint ventures such as Tomago Aluminium, Queensland Alumina Limited and the Escondida mine. The company estimates that this would raise reported emissions from 28.4Mt CO2e (managed) to 31.8Mt CO2e (equity) for the 2018 baseline used for its new targets. From now on, Rio’s norm will be to adjust this emissions baseline to account for acquisitions and divestment. 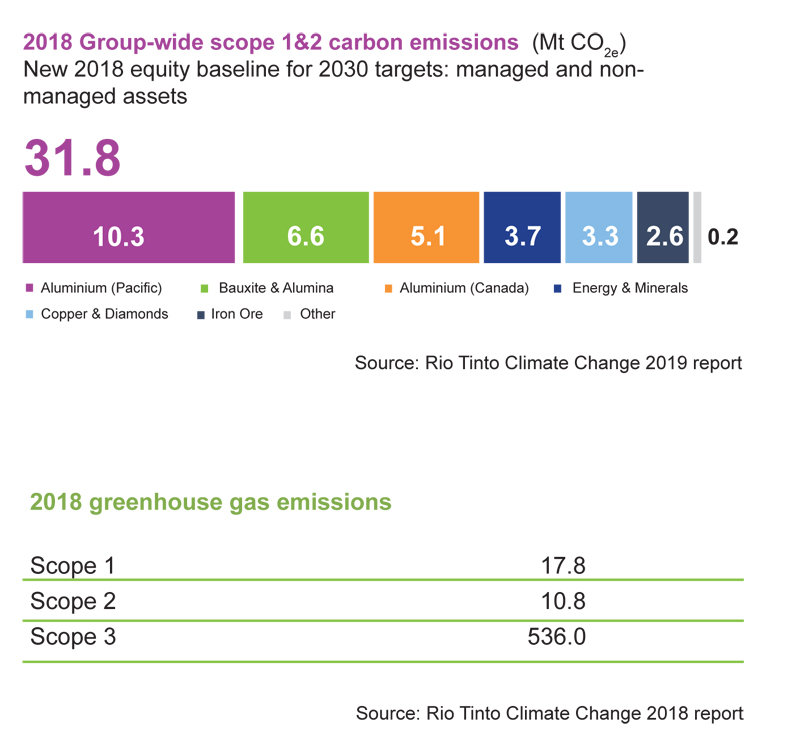 Most industrial producers cite financial constraints as the main reason for their inability to go more green. Rio Tinto is no exception, but there is no doubt where its sympathies lie. A clue to this was given by Jacques when he said, “The challenge for the world, and for the resources industry, is to continue the focus on poverty reduction and wealth creation, while delivering climate action.” However, he also made it clear that the “sacrifice” cannot be made by corporations alone; governments also will have to accept slower economic growth and shareholders be content with lower returns.