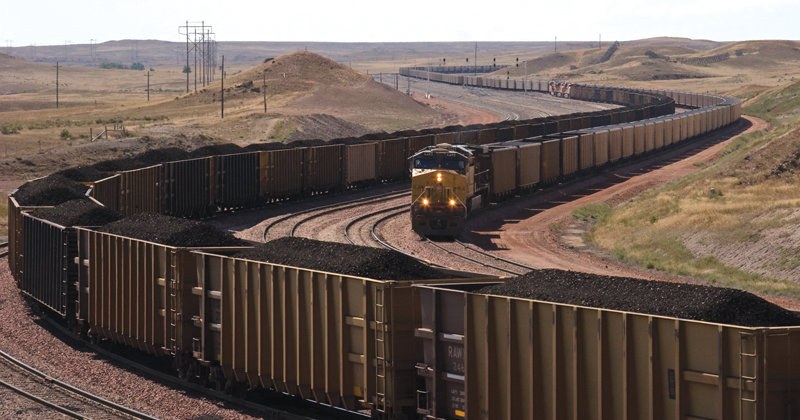 As he laid the foundation stone of the 414.6-km railroad between Tavantolgoi and Zuunbayan on May 24, President Kh. Battulga noted that something was at last happening on the ground to implement the State Policy on Railway Transportation adopted by Parliament in 2010. For nine years, he said, domestic politics and politicians with personal stakes in coal mining had not allowed anything to move.

Recalling his days as Minister of Road Transportation in the coalition government, Battulga said he had tried to build the railroad in the northern part of the country. He had formed a team, determined routes, signed agreements, laid foundation stones, obtained loans and had spent some of the money, too. Yet, not one km of railroad has been built. There is only piled earth and crumbling embankments on the route from Tavantolgoi to Gashuunsukhait. The government is paying interest on the $200-million loan and the principal must be repaid in 2022. If Energy Resources and Deutsche Bahn had been allowed to build the short railroad to the border through a concession agreement, it would have been commissioned six years ago. When their licence was revoked, Infrastructure Development, a Mongolian-Russian joint stock company with involvement of Russian Railway, was set up to build the Tavantolgoi-Zuunbayan railroad. It is interesting that at exactly the same time, the Russian Parliament decided to develop and strengthen Russian Railway  Transport Development Strategy 2030.  Mongolia’s State Policy on Railways was adopted some six months later, which included building the Tavantolgoi-Zuunbayan railway.

Soon after his election as President, Battulga went to Russia to attend the Vladivostok Economic Forum and signed an agreement with Russia on exporting Tavantolgoi coal through Russian Far Eastern ports. This was almost immediately followed by a visit to Ulaanbaatar by O.V. Belozerov, President of the Russian Railway. He met with President Battulga and they discussed Russian interest in a Mongolian railway to the east. I.V. Milostnykh, First Deputy Chairman of Ulaanbaatar Railway, told MMJ in an interview that his company was very much interested in construction of Tavantolgoi-Zuunbayan and Zuunbayan-Khangi railroads, noting that the capacity of the Zamyn-Uud border crossing was not enough to handle all exports from the southern region to China. There was urgent need for a second export route, and as Russia was a   50 percent stakeholder of Ulaanbaatar Railway, Russian Railway has the right to build the two railroads from Zuunbayan and also, for that matter, any other new railroad in Mongolia.

Some important decisions have been taken in relation to the Tavantolgoi-Zuunbayan railroad. The MNT800-billion profit Erdenes Tavan Tolgoi made last year would be used for its construction and soldiers would be mobilized to do the work under engineers and other technical experts of Ulaanbaatar Railway. An agreement on 66.4 percent reduced tariff for railway transit has been signed with Russia and a similar agreement with China for 50 percent  reduction is expected to be formalized soon.

This railroad will go through areas of mineral deposits such as Tavantolgoi, Oyutolgoi, Tsagaansuvarga, Kharmagtai, Zoovch-Ovoo and others. Costs are expected to be recovered within 10 years, as the increased export freight would mean more profits for the railway.
The State Policy on Railways calls for a new railroad to cut transport costs and time so that coal from Tavantolgoi could be sold at a price to compete with those of Australian, Indonesian and Russian coal.

The President was told about Caofeidian, the Chinese bulk commodity port, during his visit to China in April. According to Z. Enkhbold, Chief of Presidential Staff, if the new railroad reaches Choibalsan, goes on to Khuut and crosses the border through Bichigt, several Chinese ports would be accessible, with Caofeidian the closest. The price of coal from Tavantolgoi will be $300 there. Coal from Australia and Indonesia is also downloaded there.

Going to this port through Bichigt would however mean taking a more than 1000 km longer route than crossing the border at Gashuunsukhait or Khangi or Zamyn-Uud. This is being downplayed on the ground that the extra length would be through Mongolian territory and could be used domestically. Experts, however, demur, saying that maintenance expenses would be more than any likely income. Transport rates will then be high putting the exporter at a disadvantage. It is believed that China has offered a 50 percent   reduction in tariff for transport to its sea ports, but only if the cargo enters China at Zamyn-Uud. However, there has been no official word on such an offer.

But why is the Bichigt border point being prioritized? The Khuut-Bichigt railroad will be built by a joint venture between Mongolian Railway (51%) and Baixing Railway (49%), and its feasibility study has already been completed by a consortium between  the 4th Bureau of Chinese Railway and Baixing Railway. Construction is likely to begin with a soft loan from the Government of China. The Mongolian Government’s Action Plan 2016-2020 contains building a narrow-gauge railroad from Khuut to Bichigt, as part of the second phase of the State policy. But the Railway Engineering Consulting Group of China has already almost finished work on a feasibility study of a 177.2-km railroad to Bayantumen on the eastern part of Choibalsan town.   It will take 2.5 years to be finished and cost $700 million, estimated to be recoverable in 28 years. The Chinese interest in building a railroad on the eastern part of Mongolia is not new and intersects with Russian strategy. A railway corridor to connect Russia and China is getting closer to becoming reality, mainly to transport Russian mineral resources such as coking coal from Tuva, copper, iron ore and gold from Zabaikalsk to northeastern China.  It is too early to say what economic benefit this will bring to Mongolia and in what form.

The last nine years have seen no progress on the shortest route or the TT-Gashuunsukhait railway, but step-by-step moves have been made on the northern route even at a time when the government is looking for investors for the TT-GS railway. This is the one nearest the already established main market, and the commodity to be transported is ready. Both are advantages not to be trifled with, particularly when analysts are warning that from 2020, the coal market could show a downward turn. Add to this the US-China trade war and the chances of a weaker market look stronger. Mongolia has much to do be ready for such an eventuality. These include building the Tavantolgoi-Zuunbayan railroad and continuing further to connect it with the Bichigt border, expanding capacity at the Zamyn-Uud border, finalising with China where the Tavantolgoi-Gashuunsukhait railroad route will be connected to the Chinese network, and concluding an agreement with it on 50 percent reduction on transit transport tariff.

The interests of the northern neighbour

Mongolia has long dreamt of having access to the Far Eastern ports of Russia, and of carrying coal and other minerals there by the Trans Siberian Railway. Russia is now in the fifth year of a long-term and expensive plan to overhaul this railway to turn it into being Russia’s main economical vessel. Russia is in a hurry to sell its abundant natural wealth, taking advantage of the increasing demand for raw materials in Asia-Pacific countries. President Putin has said that his country will double the volume of its coal export quite soon, a goal not hard to achieve if it can export 100 million tonnes of coal to China and East Asian countries. That means Russian coal will compete with Mongolian coal. A more efficient Trans Siberian Railway is also important for North Korea to reach the South Sea. A bridge on the Amur will be open to railway traffic in the autumn, allowing Russia to deliver its mining products to northeastern China.

The coal that Russia plans to export will come from Siberia, Kuzbass, Khakassia, Tuva and Yakutia. In the last two years, extraction has begun in 15 new mines and plants with a total capacity to annually process 60 million tonnes of coal are being set up. One of these mines, Kolmar in Yakutia, has revealed that it plans to sell the same amount of coal to China, Japan, South Korea, Vietnam and India as Mongolia now exports.  The Elga deposit has coal which is of the same quality as that from Tavantolgoi, and which is exported to China, Japan, India, Myanmar and Vietnam. All this new freight will strain the capacity of the railroad if it is not quickly and comprehensively upgraded.

Tuva and Zabaikalsk, near the border with Mongolia, have abundant coal, gold, iron ore and nonferrous metals and several deposits as rich as Tavantolgoi and Oyutolgoi but the area lacks the infrastructure to take them to the markets. One way could be to extend the Kyzyl-Kuragino railway through Mongolia’s Tsagaantolgoi, Artssuuri, and connect it to the Mongolian rail network somewhere on the north of Erdenet city. This is the reason why Russia has supported the project to build the 547-km Erdenet-Ovoot railway, one of the two routes included in the State Policy on Railways through an amendment in 2018. Russia has seen that the future of transporting its mining products lies in help from Ulaanbaatar Railway.

Russia is also interested in reaching the Chinese market through the eastern part of Mongolia. Once the railway link is in place, it will carry Russian minerals to the South Sea of China and thus open up the entire global sea transport. This is why the word “mutual” is there in the Agreement on the Conditions of Railway Transit Transportation signed by Mongolia and Russia in 2018.  It gives Russia the right to transport its mineral resources on the railway through the territory of Mongolia at reduced tariff.

And moves by the southern neighbour

China’s policy of reducing air pollution has meant that coal consumption and traditional manufacturing activity are moving from coastal areas to other regions, among them the northeastern parts of China, bringing industrial clusters and trade centres closer to Mongolia. Take, for example, Ulaantsav, an aimag bordering Zamyn-Uud and Khangi. It is being made into the largest logistics centre of the mainland to be connected with foreign countries through highways and railways. It will also be the logistics base of the China-Europe railway.

Or take Bugat. It is known throughout the world for its machinery and equipment manufacturing, and energy and steel production. As of today, 105 projects are being implemented to further develop infrastructure and logistics facilities.

China prioritises building trade roads to the eastern part of Mongolia in order to feed raw materials to the industries to be centred in its northeastern region. The two governments have held talks on cooperation and investments, and on a railway along the eastern vertical axis of Mongolia. Mongolia has been offered the right to use the area to reach seven ports in the north and northeast of China.

China has been building railroads to the main trade border points of Mongolia, including one from Bugat to Mandal, and another covering the 214.5 km from Zuunkhatavch to a point in Shanxi province that will then be connected to the Chinese railway network.